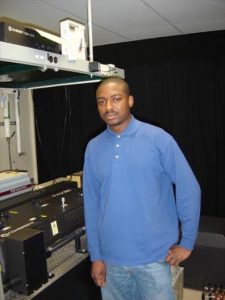 Elom was born in Togo, a small nation of 4 million habitants on the coast of West Africa. He grew up in Lome, where he attended and graduated from high school de Tokoin in 2001. In high school, he specialized in Physics and Mathematics. His dream was to pursue a career in Physics. Elom was very impressed by the contributions of Albert Einstein and Isaac Newton to Physics and the contributions of Laplace, Poincarre, and Riemann in Mathematics. He moved to the US in 2002 and attended Camden County College for two years, majoring in Biology. During my time at Camden Community College, he became interested in Charles Darwin’s theory of Evolution.

Upon completion at Camden Community College, Elom decided to further his education at Temple University, double majoring in Biochemistry and Chemistry, and minoring in Mathematics. Elom joined the Borguet research group in January of 2007 in order to learn and master the skills and secrets of scientific research. The goal of his research consisted of understanding the Effect of Doping on the growth, stability, and nonlinearity of Hydrogen terminated Silicon (111) surfaces. He also was very determined to find out how the outcome of his research came to be useful for various applications, such as wet control, corrosion inhibition, and for the exciting field of growing organic functional groups on the silicon surface as well as for Bio implants.

Elom graduated in January of 2009 and is currently a candidate for MD degree at Pennsylvania State College of Medicine and hopes to pursue a career in Nuclear or Internal Medicine.

Elom has this to say about the Borguet Group: “The Borguet research group has allowed me to sharpen my intellectual curiosity, build my academic confidence in science and technology, and develop a stringent sense of professionalism; all vital and necessary skills I found out later in medical school. The Borguet Group’s weekly meeting presentation was an invaluable academic asset in the sense that it has a similar format to Problem based learning (PBL) which is a small group case discussion, usually facilitated by an experienced clinician, where the majority of our medical learning takes place. There is no substitution to having a solid research-based educational background to ease the transition to evidence-based Medicine.”