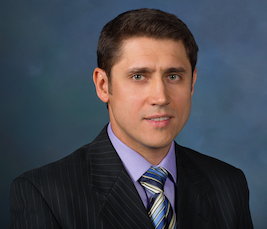 While in the Borguet Group, Oleksandr was involved in the research of ultrafast laser spectroscopy of interfaces. As a part of his doctoral thesis work, he developed a novel type of ultra-broadband infrared laser sources based on noncolinear optical parametric amplifier (NOPA) technology. These lasers produced infrared pulses that have enough bandwidth to cover broad vibrational spectroscopic features in condensed phases, such as the entire spectrum of the hydrogen-bonded and non-H-bonded hydroxyl vibrations
in water molecular systems. Oleksandr applied his NOPA to the broadband nonlinear optical spectroscopy of water-mineral interfaces. His studies, for instance, helped detect certain hydrophobic properties of silicon dioxide surfaces that would not be expected based on the wide prior knowledge of predominantly hydrophilic nature of hydroxylated silica.

After graduation, Oleksandr joined Quantronix Corporation, which was later merged with its sister company, Continuum Electro-Optics. There, he was involved in the development of ultrafast (femtosecond and picosecond) tunable solid-state laser systems. Later on, Oleksandr moved to Los Alamos National Laboratory where he carried out research in the ultrafast nonlinear optics and spectroscopy of semiconductor nanomaterials (e.g. quantum dots).

In 2016, he joined IPG Photonics in the San Francisco Bay Area as an R&D Scientist.