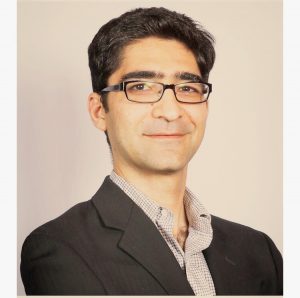 Ali received his M.Sc. degree in Physical Chemistry from Sharif University in Tehran, Iran where he studied surface reaction mechanisms. He traveled to the USA to join Professor Borguet’s group at Temple University in 2005.  His Ph.D. focused on the studies of the vibrational spectroscopy and dynamics of interfacial water using vibrational sum-frequency generation (VSFG). His experiments were the first to reveal how the ultrafast vibrational dynamics of water at a solid interface (H2O/SiO2) can be slowed down, a consequence of the reduced number of neighbors. In addition to spectroscopy and dynamics of water, he extended the application of VSFG to characterization of the structure of self-assembled monolayers (SAMs) and their effect on processes as diverse as neuronal cell growth and electronic device fabrication.

Ali’s was the recipient of several awards based on his work in the ultrafast vibrational dynamics numerous awards. He received both the Coblentz student award and inaugural William G. Fateley student award which were given to him at the annual Federation of Analytical Chemistry and Spectroscopy Society meeting in October 2010 in Raleigh, NC.  Other awards included Daniel Swern Fellowship as well American Chemical Society, 2007 Philadelphia Section Award.

Ali defended his dissertation on September 2010 and immediately accepted a postdoctoral at Lawrence Berkeley National Laboratory.  Following a short visit in the group of Professor Stephen Leone, Ali joined the group of Professor Richard Saykally at University of California-Berkeley where he developed UV-VSFG to study the adsorption of ions at the interfaces.

Ali is currently working at Apple Inc., as a Senior Module Process Engineer.