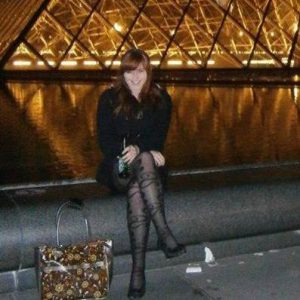 Ashley hails from Pittsburgh, PA and came to Philadelphia to seek out new experiences. She found many when she was accepted into Temple University in 2009 and later got the opportunity to do undergraduate research. Ashley got her B.S degree in chemistry at Temple. She joined the Borguet Group because both the sensor projects and research process interested her. In the Borguet group she studied new ways to make surface acoustic wave (SAW) sensors that detect the presence of specific molecules. She is attracted to the pursuit of finding solutions to real scientific problems, and this project addressed that attraction. In fact, she found the limits of her scientific understanding tested and expanded every day in this group.

Through the Trans-Atlantic Science Student Exchange Program, and with financial support from the Albert B. Brown and Temple University Study Abroad Program scholarships Ashley has continued her studies in chemistry at the University Pierre er Marie Curie in Paris, France in fall 2012.

While studying abroad in Paris, Ashley stood out in her studies not only by excelling in chemistry but also by insisting on taking all of her classes in French. Her dedication to both chemistry and the French culture has been rewarded by a scholarship from Universite Pierre et Marie Curie

Ashley received the ACS Scholastic Achievement Award in March 2013 before closing her undergraduate studies as the student commencement speaker for the College of Science and Technology’s class of 2013.

Armed with all of her valuable experiences and accomplishments at Temple, Ashley journeyed to the West coast the Fall of 2013 to pursue a PhD in physical chemistry at U.C. Berkeley in California. Ashley received her Ph.D. in Physical Chemistry from U.C. Berkeley in December 2018.