Here at the Risk Communication Laboratory we are using commercial marketing techniques to develop and test highly targeted health messages on a variety of different topics and health decisions. Below is a description of how we use Perceptual Mapping and Vector Message Modeling to develop health messages and/or materials for our research.

Additionally, information can be found on the different measures we have used to monitor the physical and psychological effects of messages on our audience. These measures include: Eye-tracking, pupil dilation, physiological responses, and functional MRI.

Read an article about our methods by the Temple College of Public Health!

Perceptual mapping methods use multidimensional scaling (MDS) analysis to create 3-Dimensional representations of how an audience conceptualizes a decision and then message vector modeling techniques are used to design messages that will be most likely to persuade an audience to make that decision. Similar to how marketers persuade audiences to buy products, we are unique in the public health field in applying these methods to health decision making. For us, if you can get someone to buy a certain brand of soda, you can also get them to “buy” a colonoscopy!

This video explains the basics of how perceptual mapping works, and how we can use that information to change behaviors 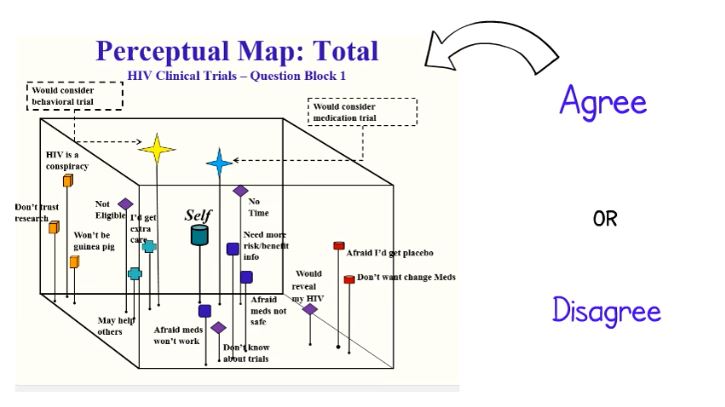 Perceptual mapping uses multidimensional scaling (MDS) analysis to yield a graphic display of how respondents perceive the relationships among a set of elements (e.g., medical treatments and their perceived risks & benefits).The resulting maps (see figure above) reflect how the key elements are conceptualized relative to each other and relative to “Self,” which represents the group being studied. 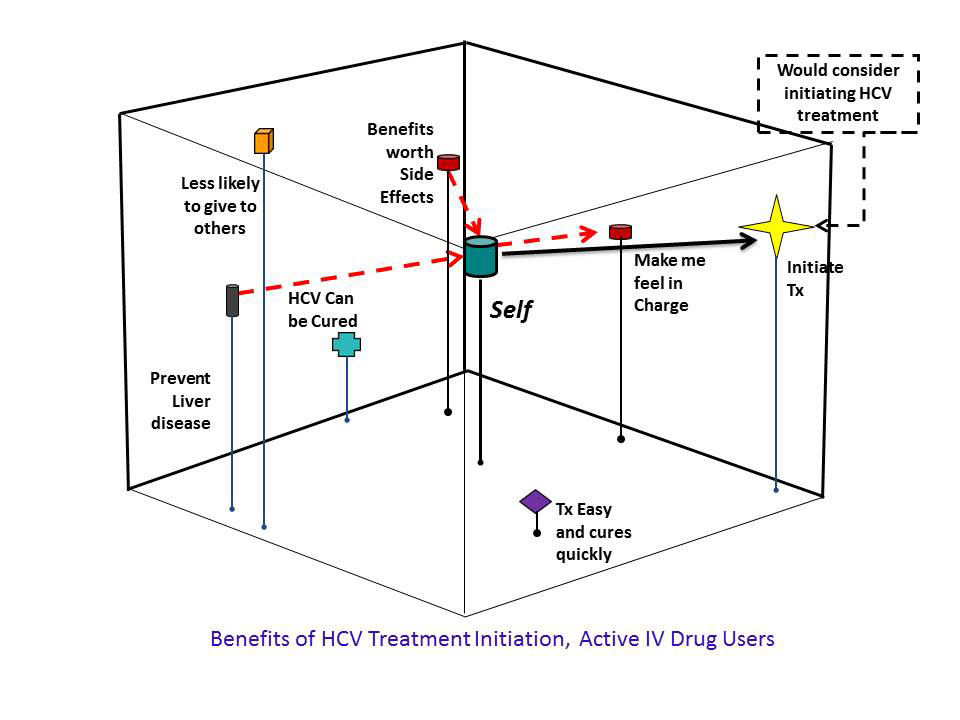 Using conventional surveys, respondents rate, on a scale of 0 to 10, the extent to which they agree or disagree with a series of statements, put together for conceptual consistency in “statement blocks”. For example, barriers to making a decision/changing a behavior or beliefs about the decision/behavior. For example, we might ask someone who has HCV and has not been treated to respond to a statement like: “The treatment for HCV is easy to take and cures quickly” (benefit) or to “The treatment for HCV will cause a lot of side effects” (barrier). This method is easy for all types of audiences because they just have to rate agreement with a statement and do not have to think about how they associate that statement with others. The software does that for them.

To construct the perceptual maps, computer software converts the scaled judgments into distances used in the mapping. All distance matrix input data are assessed on a 0-10 scale and input values are “reflected” so that more important elements appear closer to the “self,” while those judged less important are farther away. In the last step, graphic arrays of the distances among the elements are plotted and displayed in three-dimensions for visual inspection and interpretation. The percentage of variance accounted for by the analysis is provided as an index of the explanatory power of each map.

The maps can then be used to determine optimum message strategies through vector message modeling. For example, to get a group to “move” towards getting treatment for HCV, a target vector (e.g., dotted line in above figure) is used to start the mathematical vector resolution process. This is like a physics model to understand which concepts would need to be “anchored” on to move that group in the 3-dimensional space. These concepts then become the key messages in the campaign or intervention. This allows us to not “throw the kitchen sink” at people, which may happen if we try and include everything that may be statistically significant in traditional survey research. This method then allows us to accurately target the messages directly to the target population’s conceptualization of the risks and/or benefits of carrying out the hoped for behavior.

These measures help to monitor the physical and psychological effects of the message and its medium.  Measures include:

Eye tracking analysis is used extensively in marketing research to understand how messages and materials are being used by audiences. Eye movements capture attention to information and provide an index of the input of information to more complex processing and/or reasoning. It can provide unique insight on consumer understanding of health communication, particularly when the messages involve combinations of visual and language processing.

The following videos and text reference material from an article written by Dr. Sarah Bass entitled “Use of Eye-Tracking and Gaze Pattern Analysis to Test Health Messages in Low-Literacy Groups" 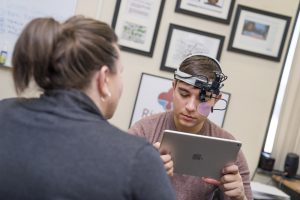 Eye-tracking was especially helpful in understanding how best to design materials for low-literacy groups, providing tangible evidence of how tracking of text is directly related to comprehension as well as intended or actual behavior. Eye tracking output can clearly differentiate whether an individual is reading text as expected or if he/she instead has to read and then re-read sections because of literacy ability. If presented with material that is above literacy and/or numeracy levels, eye tracking can be used to show areas where individuals have difficulty accessing the content, which can then be related to other outcome measures. The Risk Communication Laboratory is continuing to use these methods as a method to test developed health communication messages to ensure that they meet the needs of individuals with all literacy abilities.

This measure is an index of interest and attention to information.  As interest/attention increases, pupil dilation increases – and this holds true for both emotionally pleasant and unpleasant stimuli.

These physiological measures can be simultaneously assessed with the eye-tracking/pupil dilation measures to determine the extent to which the message is having an emotional impact on the participant. This is especially useful in perceived high risk or high fear situations, such as bioterrorism.

We have begun to explore the potential of fMRI as a tool to link actual information processing in the brain with the conceptual structures provided by perceptual maps.  Brain imaging shows which areas of the brain are activated, but does not identify what is happening conceptually in those areas.