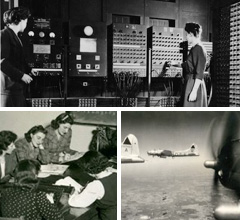 LeAnn Erickson is a Professor at Temple University in Philadelphia and has been an independent filmmaker for over 35 years. Her work has appeared on television, in galleries, and has won international recognition in video/film festivals. She is a recipient of regional and national production grants for her work from such funding sources as the National Endowment for the Arts, the Jerome Foundation and the Leeway Foundation.

For more information on her teaching and filmmaking visit:

Co-writer Seabright McCabe is an award-winning journalist, director, playwright and actress. Her series of articles on the Top Secret Rosies of WWII, written for the Society of Women Engineers, won Folio Magazine’s 2014 EDDY Award for Excellence in Series Writing. Her first screenplay, the historical thriller, HANNAH DUSTON is in development. She is currently at work on a second screenplay, WHITE LILY, in collaboration with renowned forensic genealogist Melinde Byrne.