The following courses are being offered Spring 2023. Courses that meet in person or for synchronous remote sessions are scheduled for 5:30pm to 8pm, except where noted otherwise. Please refer to Banner for more information.

The following courses are being offered Fall 2022. All instruction is in person at Main Campus unless otherwise specified. Courses that meet in person or for synchronous remote sessions are scheduled for 5:30pm to 8pm, except where noted otherwise. Please refer to Banner for more information.

The following courses are being offered Spring 2022. Due to social distancing measures, courses are fully online unless otherwise specified. Courses that meet in person or for synchronous remote sessions are scheduled for 5:30pm to 8pm, except where noted otherwise. Please refer to Banner for more information.

The following courses are being offered Fall 2021. Temple is going back to in person instruction in the fall. However, as noted below, some courses are meeting online only. Courses that meet in person or for synchronous remote sessions are scheduled for 5:30pm to 8pm, except where noted otherwise. Please refer to Banner for more information.

The following courses are being offered Spring 2021. Due to social distancing measures, courses are fully online unless otherwise specified. Courses that meet in person or for synchronous remote sessions are scheduled for 5:30pm to 8pm, except where noted otherwise. Please refer to Banner for more information.

The following courses are being offered Fall 2020. Due to social distancing measures, some courses are fully online or in a hybrid format. Courses that meet in person or for synchronous remote sessions are scheduled for 5:30pm to 8pm, except where noted otherwise. Please refer to Banner for more information.

As an Environmental Planning Intern at the Delaware Valley Regional Planning Commission (DVRPC), I spent this past year working with staff in the Office of Environmental Planning to create a verified inventory of off-road walking, hiking, and biking trails in several New Jersey counties. This ongoing project has included several phases, including data collection and processing, feature editing, verification, and mapping/visualization, all of which I have had the privilege of contributing to. Though the inventory is still in the works for all four counties (including Burlington, Camden, Gloucester, and Mercer), much of the verification and mapping has been completed for Mercer County. The overall goal of the project is to create a single GIS-friendly file with selectable layers of verified and unverified trails, categorized by surface material and multi-use status, for each of the four counties. 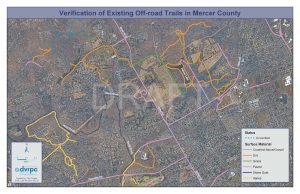 In addition to verifying surface type and correcting geometry, I was tasked with classifying each trail segment according to whether it is multi-use or not. Where possible, I used ArcMap’s distance measuring capabilities to measure the width of trail segments to determine whether they conform to AASHTO standards for path width. In cases where this was not permitted by Nearmap or Google imagery, I referred to official park and/or trail brochures to determine the multi-use status of trails.

Finally, I used ArcMap to determine the percentage of each surface type, which enabled me to make the chart included in Figure 2, which is a county-wide visualization of verified and unverified trails of each surface material. As shown in the pie chart, I was able to successfully verify approximately 71% of the trails in Mercer County using the methods I’ve described so far. Future work may involve performing field checks to verify trails that are not visible in aerial imagery or included on park and trail maps. At this point in the project, next steps include verifying data for Camden and Gloucester Counties, merging the data into a single file for all four counties, and producing more maps and visualizations focused on multi-use status, verification status, surface type, spatial distribution, etc. Eventually, DVRPC hopes to combine this inventory of trails in its New Jersey counties with its existing Regional Trail network data to provide a comprehensive inventory of trails and connections throughout the Greater Philadelphia Region. 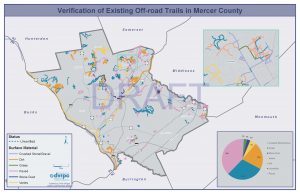 In May of 2019, I started an internship at the Economy League of Greater Philadelphia working as a Justice Policy Research Intern. During the first three months, I was working on a Criminal Justice Research project pertaining to the economic impact that a pardon could have on an individual with a criminal record, as well as their families and communities. My main tasks for this project were to conduct literature searches that would inform the basis of the project as well as design maps on socio-demographics, arrests rates, pardon applications filed and granted (2008-2018) throughout the state of Pennsylvania. Moreover, there was an emphasis placed on five key counties that had high arrest rates that included: Philadelphia, Bradford, Dauphin, Potter, and Allegheny County.

Following that, the data used in creating these maps came from the United States Census Bureau, Federal Bureau of Investigations, and the Pennsylvania Board of Pardons. I created approximately 60 maps for the project that my supervisor asked for but due to time restraints and the narrowness of the project, only two of the maps I created were included in the final product (http://economyleague.org/uploads/files/518454652334570386-impactofpardons-final.pdf). Those maps displayed rates for pardon applications filed and granted over top of county arrest rates for Pennsylvania. Pardon applications and grant rates were visualized using graduated symbols technique, while the arrest rates used a graduated color method. 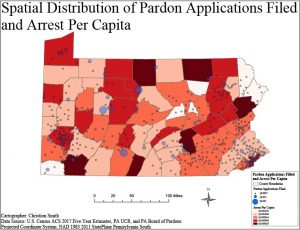 Figure 1: Pardon application rates over top of arrest per capita in Pennsylvania. 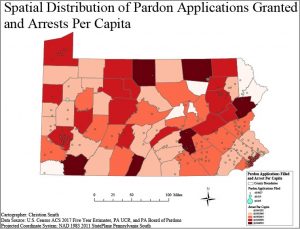 Figure 2: Granted pardon application rates over top of arrest per capita in Pennsylvania.

Overall, I found this project to be rewarding in that I got to utilize my knowledge of criminal justice that I obtained from my undergraduate education in conjunction with my coursework in the P.S.M program. Ultimately, this enabled me to craft nice map visualizations and contribute in a meaningful way to criminal justice policy, while gaining practical experience in the application of GIS for public policy.

The following courses are being offered Spring 2020. All courses meet from 5:30pm to 8pm, except where noted otherwise. Please refer to Banner for more information.

To achieve this, the Division of GIS utilized the current data available, as well as newly acquired data that was not included in the first county parks map series. This also gave our Division the opportunity to update existing data that would be used for these maps. This is currently an ongoing project, with 10 maps completed and approximately 30 more maps to be redesigned. The timeline to complete this project is August 2019 so that the maps can be showcased at the Middlesex County Fair with the new re-branding initiative.

The first process was to analyze current and available data to determine what would be utilized in the creation of a new county park map series. It was necessary to know what maps and data would require updating, as well as fill in missing data gaps of our currently existing parks data. Road Centerlines, Park Boundaries, Water Bodies, Streams, and County Park Land boundaries were some of the currently existing data that was already existing and was utilized within these maps. Park Picnic Groves, Trails, Walking Paths, Park Fields, and Park Amenities were data points that also already existed but needed to be updated before including them in these maps. This opportunity allowed the GIS team to review currently existing data and fill in the missing data gaps.

Planimetrics is a newly acquired dataset with robust data that was also utilized in this map series. This data came from a digitizing campaign to map structural features in Level 1 LiDAR and 3-inch aerial imagery.  Such features include building footprints, sidewalks, stormwater facilities and more.  Also included in this map series dataset is the NJ State data that was needed to complete the maps; such as Land Use/Land Cover data to add Forest, Agriculture, and Wetlands to the maps. To create a textured relief, Hillshade derived from the Level 1 LiDAR, was also added to all the maps. After all the data was up to date, redesign of the maps could begin. All maps had to be consistent in color, texture, scale, symbology, branding and format. Once the redesign phase was complete, the Division of GIS collectively reviewed the map to discuss any changes and/or comments before the map was finalized.

Ultimately, all this diligent hard work resulted in a first-place achievement award granted by the New Jersey Department of Environmental Protection for ‘Best Cartographic Design’.  Acknowledgement from the NJDEP for the hard work of the Middlesex County GIS teams is validating and inspirational for the team to keep producing good GIS work. 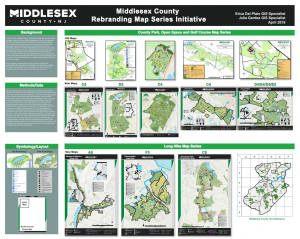