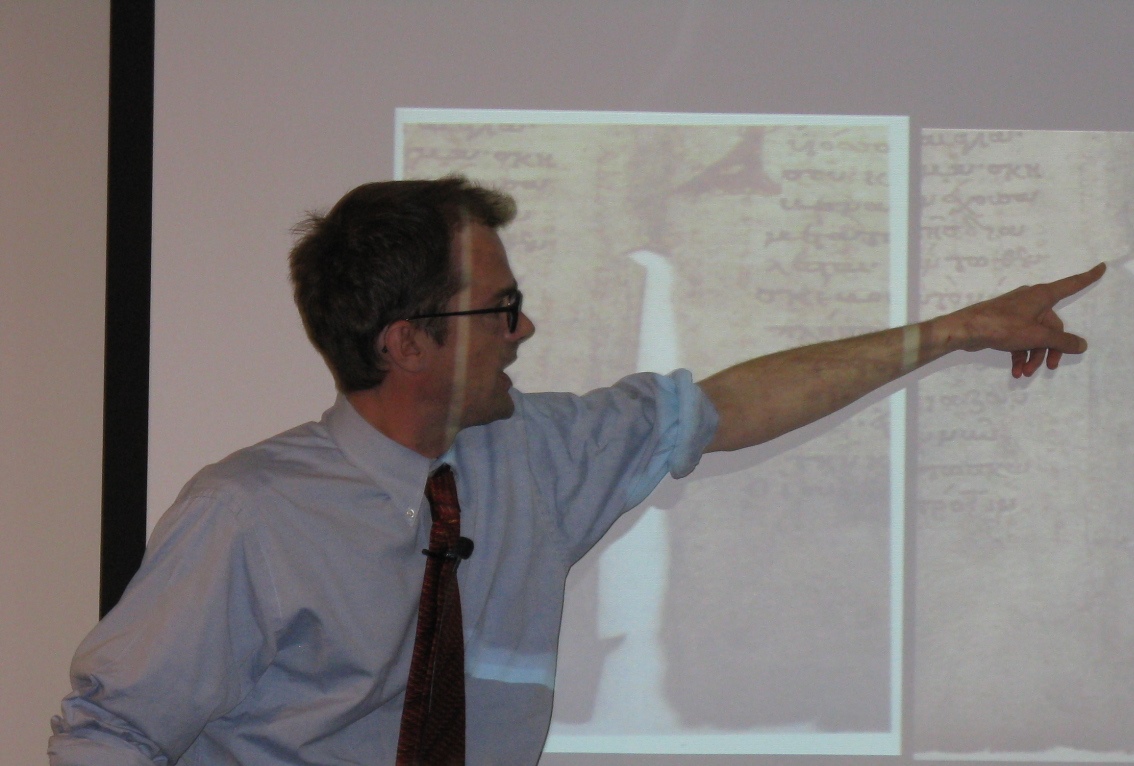 William Noel at the Center for Humanities at Temple

“My mission is to bring art and people together, for learning, discovery, and enjoyment.” –William Noel

On Thursday, April 25th, the Center for Humanities at Temple hosted William Noel,  internationally renowned expert in the application of digital technologies to manuscript studies.   Dr. Noel is currently director of the Special Collections Center, and Founding Director of the Schoenberg Institute for Manuscript Studies at the University of Pennsylvania.  His presentation,  “Free and Easy: The Appearance of Truly Useful Cultural Heritage Data”, covered the restoration and digitization of the Archimedes Palimpsest, a project that he led while at the Walters Art Museum in Baltimore.  Dr. Noel concluded with a discussion of the reasons why a “free and easy” approach is best for digitization of cultural materials.  (Eureka!)

What is the Archimedes Palimpsest?

Upon initial examination, what is now known as the Archimedes Palimpsest, appears to be a medieval prayer book, dating from 1229, written by the scribe Johannes Myronas in Jerusalem. Back then, parchment was expensive, and therefore was sometimes “recycled.”  To make this prayer book, the scribe scraped off old mathematical text from some parchment  and wrote new text on top, making the book a palimpsest.  From then until 1906, this prayer book was used in liturgical services, and suffered numerous abuses, most notably dripping candle wax, mold, missing pages, and images painted over text as late as the 1930s.  In 1906 the Danish philologist Johan Heiberg discovered the manuscript in the Church of the Holy Sepulchre in Istanbul, and identified the hidden text as Archimedes.  He photographed every page, and with the help of only a magnifying glass, transcribed and published the underlying text that he could perceive.

The twentieth century was no kinder to manuscripts than the middle ages, and from about 1930 to 1991, the Archimedes Palimpsest was either lost or gone from public view until 1998, when an anonymous collector bought the manuscript at an auction at Christie’s in New York.  This collector brought it to William Noel at the Walters Museum in Baltimore for preservation and digitization, for the world to study and enjoy.

Why is the Archimedes Palimpsest important?

Archimedes (c.287BC-212BC), brilliant scientist, inventor, mathematician, and engineer of ancient Greece, worked extensively in geometry, calculating the value of pi, the circle, the sphere, and cylinder.  He developed a theory of buoyancy called the Archimedes Principle.   Of the nine known treatises by Archimedes in Greek, hidden within the Archimedes Palimpsest are seven.  Of these seven, The Stomachion and The Method are the only known copies in the world.  Archimedes’ treatise On Floating Bodies contained here is the unique source in the original Greek.  These Archimedes texts predate any other surviving Archimedes manuscripts by 400 years.

“Best of all is to win.  But if you cannot win, then fight for a noble cause…” – Hyperides

Extensive sections of previously lost speeches by the 4th century Greek orator Hyperides, the largest discovery of new Hyperides text in over a century, also reside hidden in the Archimedes Palimpsest.  Hyperides spoke at public meetings on topics of Athenian court cases as well as politics and democracy.  Previous texts of Hyperides are gleaned only from fragments of papyri.

Other texts hidden beneath the prayerbook are a Commentary on Aristotles Catergories, two Byzantine liturgical manuscripts, and two unidentified manuscripts.

Conservation and restoration of the Archimedes Palimpsest is an enormous and ongoing task.  Progress is slow and the work is meticulous and painstaking.  To prepare the manuscript for imaging, the codex had to be taken apart because the hidden text continued under the folds of the parchment in the spine of the book.  Because some of the glue was from the late 20th century, it was particularly difficult to remove.  It took 4 years just to take off the glue!   Next, the parchment was analyzed chemically to determine the condition of the collagen, the main component of parchment.  Here you see an image of an enlargement of a cross-section sample of the parchment, the size of a pinhead, from  the Archimedes Palimpsest.  The Archimedes text is the dark stain at the top of the parchment.  In this sample, the collagen is sound.  But where the manuscript has mold, the collagen is breaking down and disintegrating.

Modern technology allows us to view the underlying text of the Archimedes Palimpsest through various techniques.  One technique is multi-spectral imaging.  In ultraviolet light, both the overlying and underlying texts are visible.  Ink blocks ultraviolet light, but the parchment flouresces, causing another light source.  There is then, two light sources, one going into the page, and one coming from the page going out, which allows us to see the underlying text.  When the images are merged together, the underlying text becomes red, and enlarging the image allows the underlying text to be legible. The only way to access the text underneath the gold-leaf illustrations added to the codex in the twentieth century, was to use the particle accelerator at Stanford University.  Ink used for the Archimedes manuscript contained a high amount of iron, which could be recognized and captured only by the strongest xrays such as those generated by the particle accelerator. In the following image, an abstraction of an object or a boat in the sea, one can see that Archimedes considered the world to be round. 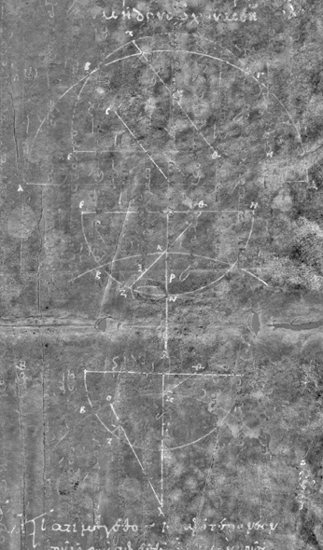 William Noel explained the basic principles that formed the foundation for the many decisions made during the Archimedes Palimpsest project.   His principles are based on ethical considerations, digital use and sustainability, and economic value for the institution undertaking the project.  Taking the example of the Mona Lisa, Noel explained that thousands of people visit the Louvre every year to see the Mona Lisa, even though they already know what the painting looks like.  In fact, the reason that the Mona Lisa has so many visitors is precisely because so many know the painting already and want to see the original.  Therefore, making digital images as broadly available and usable as possible to the largest audience benefits the institution in name recognition, visitors, and financially.  The Walters Museum in Baltimore has already benefited this way because many of their medieval manuscripts are so freely available, and that they appear at the head of results in Google image searches.  Thus, the Walters Museum gains name recognition, prestige, and popularity.

The sustainability of the data benefits from Noel’s philosophy of wide availability and use. As he explains, data from digitized cultural documents must be:

Noel also explained the importance of presenting such data as data, pure and simple, allowing others to create interfaces for study and exhibition.  Why?  Because interfaces have a shelf-life of only about three years, but the pure data can be used and re-used.  Noel said that too often institutions are busy creating “boutiquey” interfaces for their digitized data, that these institutions are presenting “apple pie” to the researchers, when simply presenting the raw data in many cases would be more helpful.  In addition, Noel gave an amusing way to think about data.  Dr. Noel says that data should be:

The criteria for data to be sustainable is that it should be cheap to maintain, in an interface that should last, and be simple, not relational.  By complete, Dr. Noel explained that images must be presented at full resolution (with derivatives as an option), with all descriptive metadata and all technical metadata.  And to make the data known, a discovery layer for human readers should be developed.  Raw xml can be presented that is machine readable, with a style sheet that combines images with the xml, to give a traditional type of presentation.

Dr. Noel ended the presentation discussing new ways for social media to further scholarship and knowledge.  For example, jokes are often hidden within medieval manuscripts.  If a scholar finds a joke in a manuscript, they tweet it!  The Penn Provenance Project uses social media to help identify the provenance, or historic background of the ownership of precious books and manuscripts by crowdsourcing.  Scholars writing blogs about the images are important, too.  Another project, t-pen.org, will, in the next few years, make manuscripts texts searchable.

Using these techniques, we can all share in William Noel’s mission, “to bring art and people together for learning, discovery, and enjoyment.” 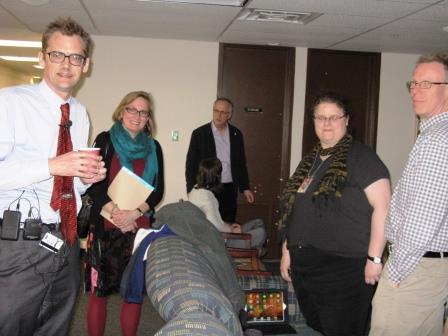 William Noel answering questions at the Center for Humanities at Temple.

Krock, Lexi.  Inside the Archimedes Palimpsest; NOVA; 09.30.03; 2 May 2013 <http://www.pbs.org/wgbh/nova/physics/inside-archimedes-palimpsest.html>

1 thought on “Free and Easy: The Appearance of Truly Useful Cultural Heritage Data”