“As the National Center for Women and Policing noted in a heavily footnoted information sheet, ‘Two studies have found that at least 40 percent of police officer families experience domestic violence, in contrast to 10 percent of families in the general population.‘” — Conor Friedersdorf, The Atlantic, 9/28/14

The National Center for Women and Policing website is currently down, but we can use the Wayback Machine to see what Friedersdorf is citing.  The two studies cited by the Center are:

The Johnson source is the testimony of Leanor Boulin Johnson who at the time was a professor in the Department of Family Studies at Arizona State University (she currently is emeritus at ASU).  Johnson explains she surveyed 728 officers and 479 police spouses in “two East Coast police departments (moderate to large in size)”.  She says the sample was drawn in 1983, so presumably the survey was conducted in that year. There is no information on response rates nor how officers were selected, nor how they were invited to participate.  The 40% figure is mentioned on page 42:

Ten percent of the spouses reported being physically abused by their mates at least once; the same percentage claim that their children were physically  abused. The officers were asked a less direct question, that is, if they had ever gotten out of control and behaved violently against their spouse and children in the last six months.  We did not define the type of violence. Thus, violence could have been interpreted as verbal or physical threats or actual physical abuse.  Approximately, 40 percent said that in the last six months prior to the survey they had behaved violently towards their spouse or children.  Given that 20-30 percent of the spouses claimed that their mate frequently became verbally abusive towards them or their children, I suspect that a significant number of police officers defined violent as both verbal and physical abuse.

To measure domestic violence, they used the “Modified Conflict Tactics Scale” which gives subjects a list of 25 conflict behaviors and asks them to report the number of times they had engaged in each of them during the past year on a “7-point scale ranging from ‘never’ to ‘more than 20 times a year'”, although in their analyses they collapse this into “never” versus “ever”.   They give examples of items constituting “minor” and “severe” violence: 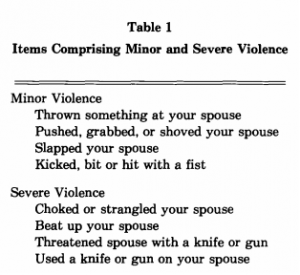 They present their findings in this table. 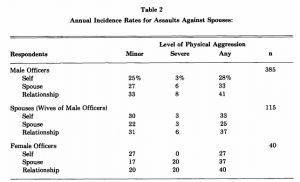 The NCWP factsheet alluded to a comparison with the general population; this apparently also came from the Neidig et al. paper which used 1985 survey data from the National Family Violence Resurvey.  Neidig et al. do not talk about how the survey measured domestic violence but looking at the user’s guide (p. 56) suggests the two surveys used comparable items.  Neidig et al.’s tabulation comparing rates of domestic violence for law enforcement and civilian families uses the male police officer’s survey reports (not the survey reports of the police wives nor those of female officers).  As Neidig et al. say, it looks like rates of severe violence are pretty similar for law enforcement and civilian families; the main difference appeares to be in rates of “minor” violence. 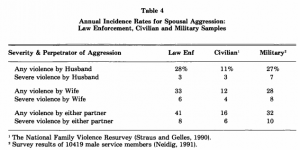 I am not crazy that the Neidig et al. study appears to be using a convenience sample and that both studies are pretty vague on recruitment.  On the other hand, I would expect that any sampling bias would run in the direction of underestimating domestic violence.  That is, officers who do perpetuate domestic violence would be less likely to volunteer to take a survey measuring various forms of personal and professional dysfunction.

This entry was posted in Uncategorized and tagged measurement, sampling, statistical scavenger hunt. Bookmark the permalink. Both comments and trackbacks are currently closed.