The Betsy Ross House in Old City not only covers the life of Ross herself, but also looks in 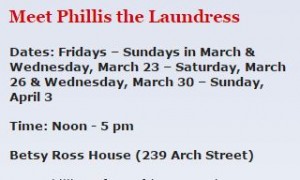 to the life of her washerwoman, Phillis. Phillis worked for Ross from 1776 until the 1780s when Betsy moved out of the famed house. She was born into slavery, and was an indentured servant until the age of twenty-one, when she was given her freedom. The Betsy Ross house has made her a part of the exhibit for Women’s History Month, giving the Philadelphia public not only a look into a woman’s life during the Revolutionary Era, but a free African American woman’s life at that time.

The house itself is a self-led walking tour that takes visitors throughout the entire house and allows them to view each room and see what it was used for. Ross herself is of course a feature on the tour, but for the month of March, the Betsy Ross House has added her laundress Phillis to the tour. For her exhibit, located in the basement of the house, Phillis talks about her job of washing Ross’ clothes and linens. Originally employed by the former owner of the house, when the owner died, Ross kept Phillis on as her washerwoman.

Phillis describes her job as being done once a month, where she comes in and cleans the entire house’s wash load, for less than what was at that time two pounds. She also describes the process in cleaning linens and clothes, which she says can take up to three days. Washerwomen were expected to come and go straight to the laundry room to clean, and that was their only obligation to the household. She described how clothes were boiled in hot water that was dyed blue to take out the stains from wearing pieces for multiple days. She also mentioned how one of the tricks behind whitening clothes was to clean them with urine, because the ammonia would help to bleach any stains on pieces of cloth.

Phillis was able to learn her “valuable domestic skills…which she used to support herself when she received her freedom” while she was an indentured servant in her youth.[1] As stated earlier, Phillis gained her freedom when she turned twenty-one, and afterwards she became a laundress. Her career choice was not uncommon for a free African American woman of the time. In fact, free African American women in the south would sometimes actually hold slaves themselves and “The slaves…generally pursued the domestic work occupations of their holders,” one of these common occupations being a washerwoman.[2] Though Phillis owned no slaves, she still represented a free black woman at this time and the careers that she could pursue.

In terms of how the event portrayed Phillis and her work, I feel that it was lacking in information. The house itself was interesting to see, but in terms of engaging activities, especially for younger visitors, there was really not much to do. Phillis’ presentation was short, and it was more or less an explanation of her job, and not her life or any significant contributions she may have made. The website goes into some detail about her, but there is not much past her age, when she became free, and how she ended up becoming a washerwoman. I would have liked to see a more in-depth and engaging presentation on the life of Phillis. Even if Phillis was not a real person, it would have been useful to see insight into the actual life of a free African American woman living in the north rather than just the jobs that she may have held.

Phillis represents a typical free African American woman of the time. While she is able to obtain freedom and find a job, like most of her fellow free women at the time, her work reflects the types of jobs that they were generally funneled into at this time. Even as free men and women, many African Americans were only able to obtain service jobs for white families. Though paid for their jobs, it is still a very low wage and similar to work that they might have performed should they have lived in the south at the time.

The house itself did not seem to know much about the event either. Though it was listed as a women’s history month event online, when I went in and inquired about the event, the staff was unsure what I meant at first. There also seemed to be little preparation as well. There were no listed times on the website, so when I arrived at opening, I was told that Phillis was not scheduled to come in for another half hour. After waiting, the event still did not begin on time because the actress portraying Phillis was still setting up at the scheduled start time. I feel that the event was both poorly planned and advertised and the staff was not very helpful either.

Though we are fortunate to have such a historical site as the Betsy Ross House, I feel that it is not utilized to its full advantage. Much of the house is simply rooms with small blurbs about what each space was used for. In terms of engaging activities, there really is not much offered. Outside of the two actors that were working when I visited, there were no interactive activities, something that I believe is important for children who visit the site. Overall, I found the event to be disappointing. It was merely a character that little was known about and there was no insight into her or any of the people she may have represented. Though the main focus of the house is, of course, Betsy Ross, it is still important to give just insight into all of the characters that are included in the museum, something I wish the Betsy Ross House would have worked harder at.