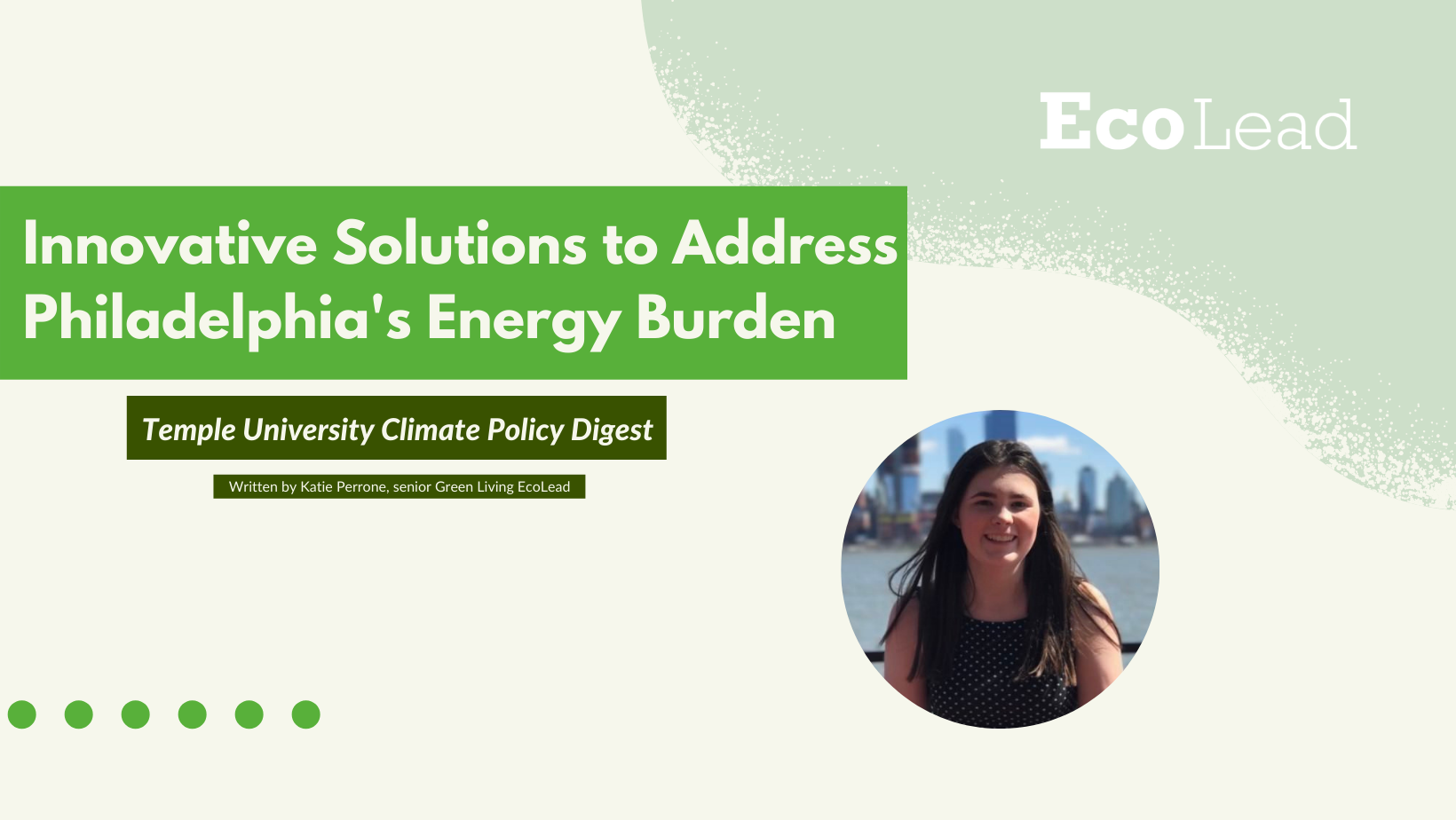 The average Philadelphian spends 6.7% of their income on energy. That’s more than twice the national average. As the city of Philadelphia explores decarbonization and renewable energy options, we need to make sure our solutions are addressing Philadelphia’s energy burden.

Philadelphia Gas Works (PGW) is the city-owned gas utility of Philadelphia. PGW produces 24% of greenhouse gas emissions in Philadelphia and serves almost 500,000 customers. They are one of the most important players in the city’s goal to reach carbon neutrality by 2050.

Philadelphia’s Office of Sustainability and PGW recently released a Business Diversification Study which explores the ways in which PGW can work to reduce greenhouse gas emissions while simultaneously sustaining jobs and addressing the energy burden placed on low and moderate-income families.

This study offers a glimpse into the future of PGW’s sustainability initiatives by presenting three pilot programs that PGW plans on pursuing. In order to hold PGW accountable and understand which energy programs offer viable, affordable, and sustainable options for the future, it’s important to explore the implications of these potential energy solutions.

The process of weatherization typically requires a larger upfront investment to make changes to a building such as improving insulation, sealing air ducts, and replacing and sealing drafty doors and windows.

The intent is that these investments will pay off in the long run by decreasing energy costs.

PGW already has a weatherization program, but the pilot program would expand weatherization efforts to low and moderate-income households by utilizing an on-bill financing method. This program would have PGW pay the upfront costs of weatherization improvements to a home, and then this money would be recovered through a monthly payment on the customer’s energy bill.

However, a representative from Community Legal Services, a Philadelphia-based group that provides legal services to low-income families, expressed disapproval of the on-bill financing program as a method of addressing Philadelphia’s energy burden.

The representative mentioned that there are programs in the city that will make weatherization improvements to houses of low-income residents for free, which is a more viable and affordable option for families who may not be able to afford the extra monthly payment.

While the weatherization pilot program is an extension of PGW’s existing programs, the other two programs presented in the report are completely new to PGW. The second program, which is set to begin with a feasibility study rather than the implementation of a full pilot program, involves the exploration of networked geothermal district systems.

PGW will explore the potential of the geothermal district systems, which would involve the use of geothermal heat pumps to extract heat from the Earth in the winter and then store it during the summer. These heat pumps are used to heat and cool buildings by carrying cold water, hot water, or steam.

PGW’s third pilot program proposes that PGW partner with the Philadelphia Water & Streets Department to investigate the potential of converting city waste to biomethane, which is a renewable gas.

The benefit of this program is that it would allow PGW to continue using the gas infrastructure that it has set up. The limitations to this program lie in the fact that it will not significantly decrease fossil fuel combustion since the majority of the gas used will continue to be fossil gas, and it also does not offer a method of addressing the energy burden.

Why These Programs Matter for Philadelphia’s Energy

In order for the city of Philadelphia to reach carbon neutrality by 2050, PGW will have to dramatically transform its business model and explore alternative energy methods. The pilot programs outlined above present the first step forward for PGW, and networked geothermal systems are particularly promising for a sustainable future.

Finding innovative and creative solutions is the first step to enacting long-lasting, sustainable changes to our energy system.

The pilot methods PGW is working to implement are a prime example of the importance of pushing energy companies to consider alternative methods that reduce the energy burden placed on low-income families and decrease greenhouse gas emissions.