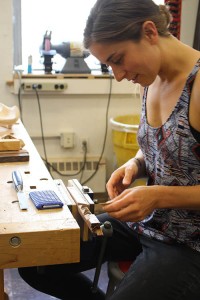 Adrien Segal is a data sculptor, which means precisely what it suggests. In her hands, commonplace climate measurements yield sumptuous forms, often in carved plywood, which conveys in its figurative stratigraphy the ebb and flow of nature. The digital sophistication of her process, wherein Segal translates large data sets into contour lines that are then mapped onto and cut from plywood, can nettle traditional wood artists. As Segal explains it, they think that “you just push a button and it cuts it out for you.” And yet, as she points out, one need look no further than Auguste Rodin to discover that the mathematical extrapolation of data points onto sculptural molds is a time-honored tradition. It’s just one in an arsenal of skills that Segal deploys toward making art that matters. “Data [is] just a resource,” Segal explains, “for … creating narratives about the time and place in which we live.”

Segal’s path to data sculpture began in the furniture program at the California College of the Arts. While there, she was captivated by the ruins of Sutra Baths, built over a century before along the beach beneath San Francisco’s famous Cliff House resort. She was also inspired by data visualization pioneer, Edward Tufte, whose work encouraged her to imagine how the tidal action at Sutra Baths might be rendered in wood. Segal pored over Bay Area tide charts and replicated their data patterns in ribbons of bent steel arrayed across a walnut table. The result was Segal’s thesis project which, as she recalls, was “really well received,” and sold soon thereafter to a collector. 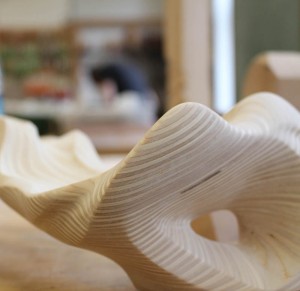 The economic calamities of 2008, however, conspired against aspiring wood artists. Segal scraped together a living variously making cabinets and waiting tables. Internships, artist residencies, and work trades sustained her along the way, and introduced her to Oakland’s Crucible industrial arts school where she’s currently headquartered. Her fascination with data sculpture flourished all the while. In 2012, Segal exhibited in Marfa, Texas along with other prominent data artists. The show earned her national attention and brought Segal into a small circle of fellow travelers, including Loren Madsen, who pioneered data sculpture during the 1970s. Madsen identifies Segal as one of a very few young data artists working today in three dimensions. 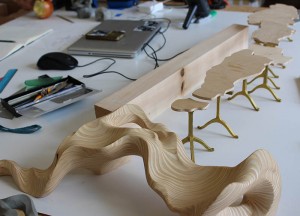 And yet, Segal is quick to assert that she’s not interested in art for art’s sake. “What is the point,” she asks, “of making art that doesn’t question bigger ideas about our time?” The idea that Segal is most concerned to question is the tendency in science to conceive of humans and nature as distinct. According to her, “we are a part of the environment and intrinsically tied to it.” Segal’s distinctive digital technique therefore aims to blur the line between our experience of nature and nature itself. But digitization is “just another tool,” according to Segal. “You have to … keep learning new skills.” Segal’s quest for skill speaks to the difficulty of her work, and the rigor of her vision. It also betrays a furniture maker’s pragmatism: “you can always rely on those skills,” she reminds us, ”to make functional things.”