The Team Behind the Team 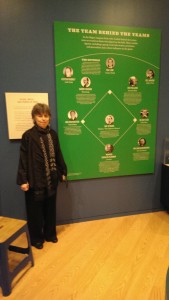 The games and players off the field in the Negro Leagues were at least as colorful as those played out in public. A brief ‘Who’s Who” of the outsized characters whose influence on the game is profiled in Out of Left Field and featured in the exhibit, Chasing Dreams: Baseball and Becoming American, National Museum of American Jewish History.

Although the target of of anti-Semitic fervor from both the black and white communities, Strong was actually of Welsh-Irish heritage. Thanks to his ownership of ballparks and fields as well as the dominant booking company in black baseball, Strong lived up to his surname, controlling much of the industry until his death in 1935 .

One of the most fascinating and least-remembered figures in baseball history, HZ Plummer was an African-American practicing Jew who owned and managed the Belleville Grays, a formidable team made up of devout “Hebrew Israelites,” black players who belonged to the Jewish Temple where Plummer was the religious leader.

Gottlieb holds the distinction of having been inducted into the basketball Hall of Fame for his prowess as a player, coach and finally owner of the Philadelphia Warriors, and also having served on the committee that selected the baseball Hall of Fame’s first black athletes. An influential booking agent and team owner in the Negro Leagues, Gottlieb also worked behind the scenes as a silent partner to several black team owners.

A pioneer of women’s baseball in the 1920s, in the ‘30s Pollock set up a booking agency to compete directly against the most powerful man in black baseball, Nat Strong. Later he owned the Ethiopian Clowns, a team that combined skilled play and comedy baseball. In order to play in the Negro American League the team was compelled to change its name to the Indianapolis Clowns and stop wearing African costumes, although they continued to perform clowning routines.

A former basketball teammate of Ed Gottlieb, Passon formed a partnership in a Philadelphia sporting goods store with Gottlieb before acquiring a team of his own, the Bacharach Giants, in 1931. Respected for his honorable behavior toward players, some felt Passon was too decent to succeed in the rough and tumble business of Depression baseball.

Best known as the owner of the Harlem Globetrotters, Abe Saperstein earned most of his wealth from his work as a promoter and booking agent for the Negro American League. He was also Satchel Paige’s personal agent, and worked with Bill Veeck to scout talent for the Cleveland Indians, the first American League team to integrate.

As sportswriters for the Communist Party newspaper, The Daily Worker, these three Jewish journalists crusaded tirelessly for the integration of Major League Baseball and were ultimately vindicated when owner Branch Rickey announced the addition of Jackie Robinson to the Dodgers lineup in 1947.

William Benswanger (on the bench)

As owner of the Pittsburgh Pirates, Benswanger was the first owner to state publicly that he would support bringing blacks into the league in 1939, and among the first to try out Negro League players in the early 1940s. Isadore Muchnick, a Boston City Councilman, was instrumental in getting tryouts for black players in Boston in the same era.