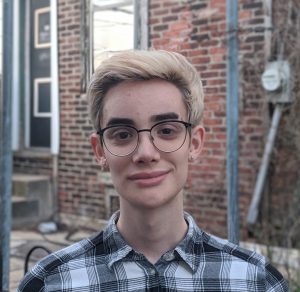 Kol Isha Atop the Mechitza: Finding a Women's Voice in Jewish Transgender Activism

in Temple University Libraries' Digital Collections repository
Click here
About the Award in Humanities: This category covers research methods in the humanities (in both traditional and digital forms). Disciplines represented include such fields as Art History, Classics, Literature, Film Studies, Linguistics and Languages, History, Philosophy, and Religious Studies. Much of the scholarly output in the humanities relies upon traditional library research methods using primary and secondary sources, though the specific source types consulted will vary from discipline to discipline.


This award is generously sponsored by John H. Livingstone, SBM ’49.

Just over a decade ago, the seminal anthology “Balancing on the Mechitza” marked the start of an era of tremendous growth in Jewish transgender life and activism. This paper explores how this movement has experienced its own form of “kol isha,” the restriction placed on Jewish women’s voices within traditional Jewish law. By applying parallels that the author finds in the work and experiences of Jewish lesbian-feminists, and in particular reading the Jewish lesbian anthology “Nice Jewish Girls” against “Balancing on the Mechitza,” the author attempts to forward insights about the ways in which Jewish trans activism has brought limited liberation for Jewish trans women. It explores what Jewish trans spaces might be able to learn from this history to further liberation not only for trans women, but for Jewish women more broadly.

Utilizing the feminist concept that an author’s own position is not only inevitably represented within the work, but also of critical importance, it bridges this theoretical analysis with the authors experiences in Jewish trans spaces and advocates material changes to how these spaces are organized—including the democratization of power and authority, a renewed focus on the gendered division of labor, and a prioritization and exploration of women’s practices, both traditional and innovative. Drawing upon the work of Black feminists, it emphasizes the challenging nature of coalition work, and advocates a shared empathy and compassionate accountability between marginalized groups which inevitably replicate systems of oppression which they do not create. Rephrasing a question by Jewish lesbian-feminist Irena Klepfisz asked about Jewish lesbian oppression in the lesbian movement, it both proposes and explores: do I feel that by asking other trans people to deal with misogyny or transphobia I am draining the movement of precious energy that would be better used elsewhere? In doing so, it attempts to claim space for a woman’s voice.

As a trans woman and lesbian Jew, exploring the history of Jewish lesbian-feminism has left a deep impact on who I am as a person and how I move through the world. In the independent study that produced this paper, I had the opportunity to not only dig deeper into this legacy, but also apply it to contemporary issues in pursuit of what I feel are the same liberatory dreams as those who wrote the texts with which I worked. I feel a sense of kinship with these authors, and having the opportunity to mobilize their words in a modern context, under the mentorship of someone who lived the events they discussed, has deeply affected me, and inspired me to approach this project with a new thoroughness. I desire to see my trans sisters, and indeed all women within Jewish spaces, freed from the continued effects of structural misogyny, and I feel acutely stirred to write in the pursuit of that goal.

I feel moved to see the Temple University Libraries recognize a piece of scholarship that centers the issues and needs of trans women—a group whose voice is rarely heard within academic scholarship and even contemporary feminism as a whole. I feel grateful that my work and my words were found to be deserving of such recognition, and hope that they can represent a small but meaningful step in moving the conversation of feminist trans liberation forward. I hope that this award might bring some attention to issues highlighted within the project, and compel those both within the academic field and within the Jewish world at large to respond in productive ways to the issues that it raises.

The resources made available by the Temple University Libraries were critical in producing the final scholarship for this project. While my advisor was a crucial source of references for this effort, the tools which the libraries provide to all Temple students made possible not only the retrieval of these sources, but also enabled me to go beyond and outside of what my advisor could recommend. In doing so, the libraries enabled me to make connections that would be otherwise unavailable, and it is my sincere hope that it represents a unique and meaningful synthesis of the sources included.

Jessica Levine’s paper, “Kol Isha Atop the Mechitza: Finding a Woman’s Voice in Jewish Transgender Activism,” is the result of an independent study we did together this fall that explored the lesbian dimension of the second wave Jewish feminism in the late twentieth-century. For her final paper, Jess decided to investigate how the Jewish lesbian contribution to that movement might be useful in the context of the emerging writings of Jewish trans activists. Her research led her to explore archival materials and other under-explored texts. The final paper asked trenchant questions and created a conversation between traditional lesbian feminist texts and current issues in the Jewish trans movement about what it means to be a Jewish woman today. I am delighted that she is receiving the Livingstone Prize for this groundbreaking work that I hope will soon be published.