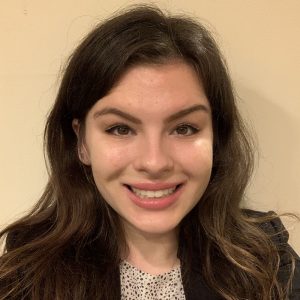 in Temple University Libraries' Digital Collections repository
Click here
About the Award in Diversity and Social Justice This category covers work utilizing humanities or scientific methodologies, involving creative work or literature reviews, but relating in some way to the overall theme of diversity and social justice


This award is generously sponsored by Gale, a Cengage company.

My Capstone paper looks at when the Committee on the Elimination of Discrimination against Women evaluates a case brought against a state using an intersectional lens—and when it notably does not. The paper also explores the extent to which the Committee’s examination of a state’s culture affects whether it evaluates a case using an intersectional framework. This research project emerged from the changing conversations around women’s rights globally, which are working to include a more diverse range of perspectives. My paper draws upon existing international human rights literature on intersectionality and global understandings of culture. I used that scholarly foundation to analyze the language of the Committee’s official legal opinions in seven cases brought under this judicial treaty body.

To analyze the Committee’s legal reasoning, I compared the cases by topic, by state, and by the Committee’s understanding of a state’s culture. Ultimately, I ended up finding support for both of my hypotheses: 1) that the Committee is more likely use an intersectional framework in its legal reasoning when it identifies a state’s culture as a contributing factor to systemic discrimination against an individual’s intersecting identities; and 2) that it is more likely to do so in the case of non-Western states. After integrating literature on intersectionality and culture to analyze these cases, I am proud to have joined the scholarly conversation around the jurisprudence of the Committee. By examining the situations when women who file a case with this Committee can obtain justice for gender-based discrimination, it is my hope that the project has shifted the focus of existing human rights literature from abstract theory to women’s lived experiences across the world while committing to an intersectional approach. That is, my goal for this project has always been to put a human face on the abstract discussion of international women’s rights law and meaningfully incorporate a diverse range of stories into my paper.

I am a double major in global studies (global security track) and Spanish. My expected year of graduation is May 2020.

I’ve been reading legal scholarship on intersectional feminism since high school, and I’ve always been interested in international legal instruments. However, the topic of my Capstone project emerged after I studied a women’s rights case in my International Human Rights Law class during the same semester as my Capstone course. The person who made the complaint to this human rights court was a woman of color, and the court’s opinion talked a lot about gender discrimination without ever mentioning the woman’s race. That made me want to research why certain women’s rights cases are looked at from an intersectional perspective and others are not. I chose to focus on the Committee on the Elimination of Discrimination against Women because I have always been interested in UN treaty bodies with judicial powers to hear individual complaints. We often tend to think of the UN as a broad, nebulous organization, so the dual focus on CEDAW and the individual women who sought redress under that committee really fascinated me. I wanted to put a human face on international women’s rights conversations among scholars that tend to get lost in the abstract. I also think a lot of people realize that women’s experiences are hardly monolithic, so I hope that my paper sheds light on an international legal approach to the conversations people are already having.

I was thrilled when I learned that I won this award! I put a lot of effort into researching, writing, and editing my Capstone paper, so it means a lot that Temple Libraries recognized my work. I also appreciate that I am being recognized for something I am so passionate about. The opportunity for my work to be published on the Temple Libraries website means a lot to me as well. I hope that my paper will encourage people who don’t typically read about intersectional approaches to international human rights law to learn more about the field for themselves!

I found tertiary and secondary sources using the databases on the Temple Libraries website, such as Gale Cengage Academic OneFile, Index to Foreign Legal Periodicals, HeinOnline, and the Max Planck Encyclopedia of Public International Law, among others. As an undergraduate, I greatly appreciated that Temple Libraries provided access to legal databases. Even though I am not a law student (yet!), I have never had trouble accessing scholarly legal sources when I needed them. I also relied heavily on the ability to filter sources based on whether they were peer-reviewed using the Temple Libraries website. This made it a lot easier to evaluate the reliability of my sources.

Emily’s project is driven by and encapsulates her dedication to securing justice for those who are unable to tell their own stories. I had the pleasure of having Emily in class as a freshman and as a senior; during that time, I have watched Emily grow, embracing interdisciplinarity and honing the research skills that allowed her to undertake this ambitious investigation of intersectionality within CEDAW. Her project gives voice to the lived experiences of women whose cases are usually only discussed in broad, legal, and theoretical principles.