Meet Julie, a student worker in Paley Library.    She has worked there for the four years that she has been at Temple, but you may not have seen her.  She works in the Special Collections Research Center, but when she started, it was “just” the Urban Archives.  As a student worker Julie has had the opportunity to assist patrons, but also did photocopying, retrieved boxes, and filed away newspaper clippings and photos.  In her last few days of work, she continues to work on an ongoing project of transferring  the Philadelphia Bulletin clippings from the big cabinets into archival boxes   Julie has really enjoyed working in the Urban Archives ,not only because of the staff and her supervisors, but because she learned many new things about Philadelphia history.  Working with the various documents, photographs and news clippings have given her insights into Philadelphia neighborhoods and landmarks, as well as the surrounding suburbs.  On one occasion she found development plans for her hometown, Lansdale, PA.  Julie loves going to the beach, and frequents Ocean City, NJ.  She enjoys supporting the Philly sports teams, especially the Phillies.  She notes one exception that during football season, she wears black and gold as she roots for her mom’s hometown team, the Pittsburgh Steelers.

Julie’s major is Speech, Language Pathology.  She started out at Temple as undeclared.  She really did not know what she wanted to do.  Of her three older sisters, who attended Temple before her, two were in the education field.  Julie loves working with children, but did not want to be a teacher.  In August of 2010, in the Temple bookstore, while buying books for the upcoming fall semester, Julie met an excited student who was graduating that day with a degree in speech pathology. The brief conversation from this chance meeting gave her the idea to look into this major.    She hopes to combine that with her desire to work with children and work in an elementary school, or an early intervention program.   Before that, however, she is going on for her master’s degree in Speech Language Hearing Science here at Temple.

Graduation, on Thursday will bea proud time for Julie.  She has studied and worked hard, and achieved dean’s list every semester.  In April, President Theobald presented her with the honors cords that she will wear on graduation day.

While I have never worked with Julie, I do know her very well.  In fact, I have known her since the day she was born, and I will be watching with pride as she graduates on Thursday, May 16, 2013! 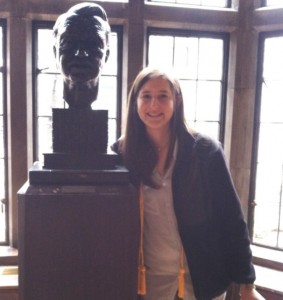