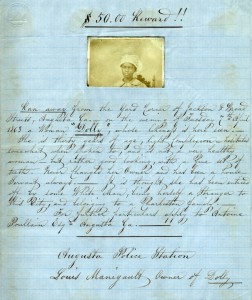 As part of its commemoration of the 150th anniversary of the Emancipation Proclamation, the Charles L. Blockson Afro-American Collection presented an Author’s Talk and Book Signing with renowned photographic historian Dr. Deborah Willis and historian of slavery Dr. Barbara Krauthamer on February 8, 2013 in Mitten Hall, Great Court.  Their book features 150 rare photographs (some of which are housed in the Blockson Collection) pertaining to the experiences of enslaved and freed black men, women and children from the antebellum, Civil War and post-Civil War eras.  Speaking to the group, Willis and Krauthamer were able to engage a packed audience of over 200 in a discourse that was a kinetic one, moving through the history, hopes and possibilities of a people seeking to achieve their fullest humanity during one of the most transformative years in our nation’s history.

Krauthamer and Willis became interested in this book project when they discovered a photograph of a woman named “Dolly.” Her picture was pasted onto a $50 Reward notice created after she ran away from an Augusta, Georgia plantation in 1863.  “We both thought that was a story that needed to be explored,” Willis said. “These images allow us to connect to people whose lives would be lost [to us otherwise]” said Krauthamer.  Their book asks: “What did [Dolly] envision when she planned her escape? What did she see around her when she stepped outside her master’s yard and closed the gate behind her? When we look at her picture we see her life in slavery, but we also recognize that the picture is a testament to her liberation.”

The brilliance of their work simply asks the viewer to look at these African Americans as agents in their emancipation.  In the end, Willis hopes their readers will find “a much more nuanced story about slavery. Not just the top down, but the fact that Black people were actively involved in obtaining their freedom,” she said. “That’s what I want people to walk away with, because I didn’t know it when I was in high school.”  “What we wanted to show through the book was African American’s dignity and sense of their own strengths and potential to shape the future and that they were intellectually and philosophically engaged in the major political and social issues of the day.”  “When we look at these photographs, we see full human-beings,” Willis said.  “They were creating their own biographies through these images.”

“Envisioning Emancipation: Black Americans and the End of Slavery” is published by Temple University Press; I encourage you to read it.