Work on organizing the papers of former Temple professor and father of American Holocaust Studies, Franklin H. Littell, is underway.  Littell was a scholar of religious history, whose focus lay in the history of sects and of Christian/Jewish relations.  He also brought world-wide attention to the importance of studying the Holocaust and its causes, and a large percentage of the more than 400 linear feet of papers (think the equivalent of 50 four-drawer filing cabinets) document that work.  This is the first occasional post about what we’re finding as we preserve and organize the collection for research use.

The collection offers a complete portrait of Littell, shedding light on not only his scholarly pursuits but also the many interests and influences in his complete life.  Littell was a pacifist and a social activist.  He was a minister and a Christian leader.  He was a husband and a father.   And, though it is hard to imagine, at one point, he was a child.

Only occasional records survive from Littell’s childhood, but what exists offers a sufficient glimpse into his young mind.  Sparse examples of his writing show a precocious child who floated between the worlds of children and adults, and suggest that the ideals of his own adulthood were cultivated early.

On Christmas Eve in 1931, a 14 year old Littell wrote to his pen-pal, S.M., sharing many details of his life and beliefs. (Based on the contents of the letter, it is possible S.M. was the son or daughter of missionaries in China.)  On one hand, the letter reflects the typical life of a 14 year old boy who apparently delighted in collecting stamps, was proud of his academic achievements, was a member of the Epworth League (church youth group), and was a good shot with a B-B gun.  On the other hand, the letter shows a mature young man that was keenly aware of and concerned by international politics.  He writes of Russian communism and Japanese aggression, and his distaste for war.  In fact, in this letter, he explains how he vowed never to participate in war.  He held fast to that vow years later as World War II loomed, when he worked with Methodist Youth in Michigan to develop a governmentally sanctioned alternative service program for Methodist conscientious objectors. 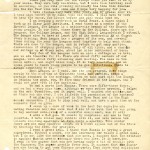 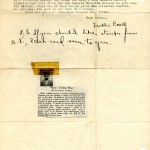