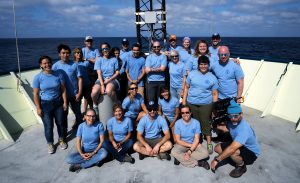 The deep sea is the largest habitat on Earth, and the most poorly understood. It begins right at our backdoor, at the edges of our continent as it plunges into the abyss. These continental margins contain submarine canyons larger than the Grand Canyon, deep-water coral reefs and mounds rivaling the total areal coverage of the world’s shallow reefs, and communities consisting amazing fauna that rely on the energy from oil and gas rather than the energy from the sun. Every year we discover more of these spectacular ecosystems in corners of our world that continue to surprise us.

Understanding these unique deep-sea ecosystems has implications beyond advancing knowledge about the habitats and ecology of the animals that live there. We are just beginning to understand the ecosystem services, or benefits to the planet and ultimately humankind, generated by the deep ocean. Seafood is an important source of protein in the human diet throughout the world. Many of the fishes that we rely on for food migrate daily to the deep sea, spend a portion of their life cycle there, or depend on nutrient cycling in which the deep ocean plays an integral role. Marine animals, plants and microbes produce compounds that have potential as pharmaceuticals, and that industry spends untold funds on drug discovery each year. At an even larger and more globally significant scale, the ocean absorbs about one-third of the carbon that humans emit into the atmosphere, and over 90% of the excess heat that has recently entered the atmosphere. Much of this ends up in the deep sea to be processed and sequestered by the diverse communities that live there.

Just as we are beginning to understand the role that these deep-sea ecosystems play in maintaining ocean and global health, we are also beginning to exploit the resources that lie there. In recent years, our dependence on fossil fuels and advanced technological capabilities have led us increasingly further offshore and into deeper waters. In the Gulf of Mexico, oil drilling is already taking place all around deep-water corals and hydrocarbon “cold” seep communities. In an effort to avoid direct impacts on the fauna of these habitats, the US Bureau of Ocean Energy Management has long had a set of procedures to examine some of the available industry-generated data and determine areas that likely contain high-density and potentially sensitive communities. “Mitigation areas” are established around these locations and drilling is prohibited within them and a small buffer zone around them.

The primary goal of the DEEP SEARCH project is to focus on the unique coral, canyon and cold seep habitats in the offshore mid-Atlantic to provide the best possible science to the resource managers at the Bureau of Ocean Energy Management so they can make sound, informed decisions about how best to prevent impacts to the sensitive deep-sea communities that lie offshore. The program began with an exploratory cruise in the Fall of 2017 and continued with a mapping cruise in the spring of 2018 in collaboration with the NOAA Ship Okeanos Explorer. These were followed by an expedition with the  HOV Alvin from Woods Hole Oceanographic Institution in August 2018, and with the ROV Jason II in the summer of 2019. We also had a series of cruises where we deployed benthic landers and carried out mid-water sampling. We will take all of the information we gather and synthesize it through 2021 and 2022 to understand the oceanography, geology, biology, and ecology of the region. We look forward to sharing all of our discoveries and knowledge with our supporting agencies and with the rest of the world as this large, interdisciplinary study continues.