Erik is on sabbatical during Fall 2020

Lab shut down during COVID, most cruises and conferences cancelled

Dr. Cordes and Dr. Amanda Demopoulos lead an expedition with the ROV Jason II as part of the DEEP SEARCH project off of the US east coast. They collect the first specimens of vestimentiferan tubeworms from the western Atlantic.

Annual Meeting of the DEEP SEARCH Project at the ASLO conference in San Juan, Puerto Rico

Dr. Cordes leads an expedition on the RV Falkor from the Costa Rica margin to Isla del Coco.

Dr. Cordes, Ryan, and Alexis sail to the canyons off of the Atlantic coast as part of the DEEP SEARCH project. They find a huge deep sea coral reef of Lophelia pertusa 160 miles off the coast of Charleston, SC. 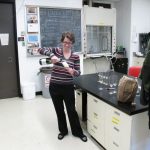 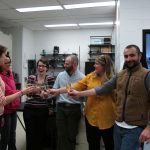 Members of the lab study deep sea corals and their associates on the seamounts of the Phoenix Islands Protected Area aboard the R/V Falkor.

Abby Keller joins the Cordes Lab as a research assistant.

The Cordes Lab returns to the Gulf of Mexico on an ECOGIG cruise to continue to investigate the impacts of oil, methane, and chemical dispersants on deep sea corals and the surrounding ecosystem

Dr. Cordes leads an ECOGIG cruise in the Gulf of Mexico on DSV Ocean Inspector to study the effect of the Deepwater Horizon Oil Spill on deep sea corals and their associates.

The Cordes lab travels to the Gulf of Mexico for their first cruise with ECOGIG (Ecosystem Impacts of Oil and Gas Inputs to the Gulf) on the R/V Nautilus as part of a time series evaluating coral and microbe response to anthropogenic and natural oil seepage.

Erik and Sam meet Jay and Andrea at the 2014 Ocean Sciences Meeting in Honolulu to talk deep-sea corals and to present the latest results from the lab.

Veronica is accepted to Dr. Ove Hoegh-Guldberg’s lab at the University of Queensland, Australia to study ocean acidification on shallow water reefs.

Danielle presents her work on oil and dispersant effects on deep-water corals at the 2014 Gulf of Mexico Oil Spill & Ecosystem Science Conference, and Erik speaks to journalists about the reporting of the oil spill at the Metcalf Institute workshop.

Acid Horizon is featured in an article on Philly.com – Read here!

Erik is working on a documentary about ocean acidification and its impacts in the deep sea with old friends Ivan Hurzeler and Kurt Langer. Check out Acid Horizon!

Congratulations to the first Ph.D. recipient from the Cordes Lab, Jay Lunden! Best of luck at UC Santa Barbara!

Erik, Danielle, and Sam are heading out to sea on the Nautilus from June 21 to July 5. All of the action will be carried live here

Congratulations to Sam on receiving a NSF GROW Fellowship to travel to Sweden next summer!

Check out the Video from the Lophelia II Project — Watch Here!

Congratulations to Conall on his graduation from Temple!

Jay’s first paper (and the first from the lab) is finally out! Congratulations Jay! Read here

Danielle and Conall are participating on a research cruise aboard the R/V Falkor from November 6-28, where they will investigate gorgonian responses to oil and dispersant exposure during live experiments conducted aboard the ship. More details: Schmidt Oceanographic Institute and researcher information.

The Cordes Lab welcomes Veronica as the new Lab Technician!

Erik, Jay, and Conall are currently on a 12-day Research Cruise in the Gulf of Mexico, using the new R/V Falknor. They will be focusing on the response of gorgonian corals to the presence of oil and other dispersants, as well as the attempting to determine the current state of ocean acidification on corals in the Gulf of Mexico. Check out more details about the cruise here: Schmidt Ocean Institute. There are also profiles on the participants of the expedition located here: Research Team

The NOPP Office announced that the 2011 NOPP Excellence in Partnering Award has been awarded to the project team of the FY 2008 NOPP-funded project “Exploration and Research of Northern Gulf of Mexico Deepwater Natural and Artificial Hard Bottom Habitats with Emphasis on Coral Communities: Reefs, Rigs, and Wrecks (Lophelia II)“. Congrats! (National Oceanographic Partnership Program)

Cheryl was named an Outstanding Owl, with her Honors and Accelerated Research in the Cordes Lab. Congrats Cheryl!

Erik participated in the event “Science Superheros” of the 2012 Philadelphia Science Festival, held on April 25th

Erik, Andrea, Jay, and Cheryl are preparing to participate in the 5th International Symposium on Deep-Sea Corals 2012 from the 1st through the 7th of April, in Amsterdam, The Netherlands (ISDSC 2012)

The Cordes Lab launched a new version of their website

Natasha, Christopher, and Conall have been awarded a full scholarship to attend the Coastal Marine Education and Research Association (CMERA) summer program. Congrats!

The Cordes Lab welcomes Alex as a new Undergrad Researcher

Jay and Sam participated in cruises to the North Atlantic Ocean and the Mediterranean Sea aboard the E/V Nautilus , which was broadcasted live at Nautilus Live

Erik, Andrea, Benedicte and Natasha participated in the “ROV Hardground Survey Cruise” in the Gulf of Mexico through the month of October

The Cordes Lab welcomes Natasha as the new Lab Technician

The Cordes Lab welcomes Benedicte as a new Post-Doctoral Fellow