Women in U.S. History have always been a crucial component to the development of Colonial America whether one wants to believe it or not. Countless primary sources rise up and provide us with essential details about our ancestors and how life used to be.  Unfortunately for us today, there aren’t many pieces of evidence from females because men dominated in every facet of life during Colonial America.  In Susan Klepp’s “Revolutionary Bodies” and Laurel Thatcher Ulrich’s “How Betsy Ross Became Famous” we see a glimpse of how women were viewed and treated by the mass society during Colonial America.

In Klepp’s “Revolutionary Bodies”, she talks about the metaphoric language that was used to describe a pregnant woman as “fruitful” and how these descriptions disappeared with the declining birth rate.  There were common themes during this time, mostly originating from Europe, that reflected certain motives for a family to reproduce at such a large scale.  The idea of marriage was directly connected to complex deals for economic survival.  There were cases where spouses were selected based on whose family had a nearby plot of land or farming tools needed for their crops.  The idea of marriage and reproduction was a political and economic institution that served important functions in society.  The power of the church also played a significant role in influencing the relationship between a man and woman.  The relationship between God and man proved to be a stronger bond than between the couple.  The idea of free choice in marriage only served to reinforce the wife’s duty to serve her husband.  John Winthrop once said, “The woman’s own choice makes such a man her husband; yet being so chosen, he is her lord, and she is to be subject to him” (Winthrop 1853).  There was a correlation between fertility rates and education.  Klepp mentions, “the higher the educational attainment of women, the lower fertility rates” (Klepp, 915).  Perhaps this suggests that as more and more women became educated on the matters of mass fertility and personal human choice, it contributed to the steady decline from the average seven children to an average of two today.  There was an incentive to having boys over girls.  The oldest son would naturally inherit the family home or farm.  Women during this time, once married, any property that a woman brought to the marriage would be directly inherited by her husband.  Klepp’s essay provides insight to the transition of the feminist mindset and where the modern family today stems from.

Betsy Ross plays into the same narrative of women establishing a voice for themselves.  It’s hard to think of women that stand out like the men who built the country we know of today.  The fact of the matter is there were women just as important as these men and contributed a great deal to our country.  When I think of women like Betsy Ross, I can’t help but think of the movements that were created by the Grimke sisters.  Angelina and Sarah Grimke hailed from the South when the institution of slavery was nearing the peak of its time.  They both declared themselves abolitionists and desired equality for men and women.  They were the first to push the boundaries of women’s public speech towards women’s rights and question African American rights.  However, when you think of famous abolitionists you quickly think of names like Frederick Douglass and Abraham Lincoln.  However, women were very much involved in the abolitionist ideas like men were.  Like Ulrich says, “Betsy became famous, not because of what she did or did not do in the 1770s, but because her story embodied nineteenth-century ideas about the place of women” (Ulrich, “How Betsy Ross Became Famous”).  Betsy Ross’s contribution to the American flag helped challenge the notion that only men created the new nation thus becoming a product of recognition for women in our country. 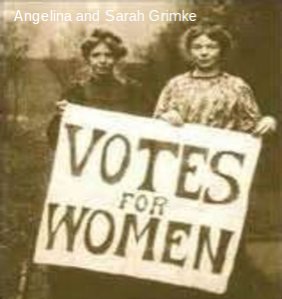 The Grimke sisters lived to see the end of slavery and the beginning of the women’s rights movement. 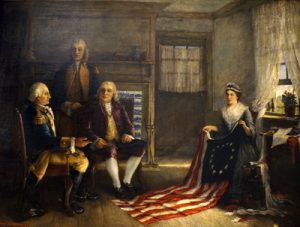 Both readings this week, “Revolutionary Bodies” and “How Betsy Ross Became Famous”, revolve around the lives of white women in the pre Civil War era. Both of these texts emphasize the lack of clarity in the historical record about women in America. Many lower class women did not write at all, and when women did produce written documents they were far less likely to be saved and deemed important. Thus, much of the deductions historians make are based on informal letters, popular linguistic terms at the time, and stories passed on verbally through generations. These methods are of course biased and unreliable as compared to official documentation of events.

However, these sources can often provide a look into the social world of these women and how they, as well as men, viewed their role in society. In the Revolutionary Bodies article, Klepp uses linguistic trends to map the attitudes of fertility from 1760-1820. Prior to the 19th century, much emphasis was placed on the belly of pregnant women and the language reflected comparisons between human fertility and the fertility of land and livestock. By the late 18th century, this metaphorical language declined dramatically and along with it the fertility rate. One supposed reason for this is women’s desire to “stress the head and the heart” instead of their bodies. Another plausible correlation is the presence of war causing women to think ahead in terms of economic hardships that come with raising many children.

These reasons depict women as the drivers of their own narrative; however, paintings of women over time also reflect these changes. The portraits shown in the article are all done by men, therefore suggesting that these views also permeated in the minds of men at the time. Paintings also play a role in the Betsy Ross article. Paintings of Betsy Ross presenting the flag to George Washington certainly take control over the narrative and depict Betsy as similar to the Virgin Mary. This mirrors the trends discussed by Klepp about how women were primarily viewed as a source of life. Narrative becomes key when discussing the history of colonial women, especially because there is so little documentation to make firm assertions. This problem is at the heart of the Betsy Ross article. There seems to be many conflicting stories in regards to the first flag and who actually made it. What makes Betsy Ross’ story so salient is not its factual accuracy, but it’s appeal to the general public. She has become an icon who is not controversial yet still shows women as strong contributors to the revolution. Ulrich states “her story embodied nineteenth-century ideas about the place of women”. This statement rings true for the changing trends in fertility rates and attitudes as well. As women’s roles shift, so do the art and linguistics surrounding the white female experience. Unfortunately nothing can be extrapolated from these texts to address the trends among lower class women and women of color during this time. It may seem difficult to make deductions about all women during this time period, but uncovering the stories and experiences of women of color is infinitely more difficult.

“Revolutionary Bodies: Women and the Fertility Transition in the Mid- Atlantic Region, 1760- 1820” by Susan Klepp

This essay explores the shifts in the attitudes of men, women, and society concerning pregnancy and fertility rates. While this subject seems most important for women, Klepp analyzes the stance of men at the time. The shift from lifetime fertility to truncated fertility is marked by the changing demographics of married couples and societal circumstances. Rather than continuously bear children, families consider the economic and social benefits of having children. They propose a number of children rather than continuously produce an unknown number of children. The exploration of fertility rates gives us an interpretation that attempts to be women centered with the narratives that Klepp provides.

Fertility and women giving birth was often compared to agriculture. This give the distinct comparison of women to cattle. Through use of certain vocabulary to describe pregnant women (“with child, “breeding”, referring to children as their “flock”), the author shows us the sentiment towards women at the time. She calls attention to the importance of words used to describe fertility. With these words we can understand the rise and decline of fertility and how that affected women.

Klepp uses the poems Annis Stockton as an opinion of childbearing at the time. She uses the poems of the same women, before and after the Revolution to show the changing views of fertility and pregnancy. Stockton was once an advocate for the many infants she was producing, but later she writes a poem about the tendency for women to remain in domestic stations (927). This shows us the increasing importance of feminine intelligence for women Post revolution. Combined with these poems, she shows us images describing the attitudes towards childbirth. Through these images we can compare the importance of fertility in 1750 with the decreasing importance in the late 1700s.

It is useful that Klepp mentions the conditions of consumerism during colonial times. Nonconsumption of the Revolutionary was a contributing factor to the lowering birthrates. While restrictions and frugality led to nonconsumption in both men and women, it led to “prudence” in women, which is the restriction of birth rates. The idea that outside forces, mostly societal and economic, was widely explored in this essay. She sites not only the attitudes towards consumption during the Revolutionary era, but the writings of Thomas Malthus on population control. In order to understand the shift in fertility rates, we must understand the economic circumstances and the revolution of intellectualism during this time of Enlightenment. Klepp offers an adequate investigation of these conditions.

Klepp was very self-aware of her writing. She mentioned the biases of history toward the wealthy and the white during the late 18th century. She also states that her research could be expanded to engage the idea of masculinity in those times. She agrees that her essay is not all encompassing and works only under that constraint.

Klepp does an excellent analysis of body autonomy during this period. Through her writing, we learn that fertility rates were directly affected by wealth, economics, social movements, and practicality. By studying fertility rates we can see the conceptions of women intellectualism and domesticity. This essay was useful for the overall theme of understanding women in history.