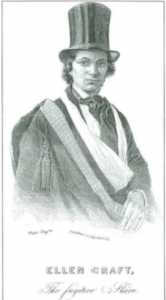 Our first student entry is by Maggie Lindrooth, who says it was unfortunate  that she was alloted the role of critic for this article–as she would have embraced the role of Advocate.

The article asserts on page 2 (13) that the Native Americans were “feminized” in the eyes of the English. How so? Was this because of the fact that the women were responsible for agricultural labor and the men hunted, an act that Englishmen at the time deemed frivolous and reserved for nobility? One would think that it would have occurred to the English that hunting large wild animals is dangerous, and that the purpose of Native hunts was quite different than the leisure fox hunts of England. Kathleen Brown at this point makes assertions about the English view of Natives, but doesn’t give much evidence to back it up, which I find problematic regardless of whether she is correct. Additionally, she describes the “tidewater inhabitants” throughout the article, but why are we not given the actual tribes that lived there? What tribe was Powhatan from? Yes, they were Algonquian-speakers, but does that mean they were also Algonquian, or just that there tribe also spoke that language? Also, in this early section of the document, native women are presented as appearing to have relative control and power in their societies. However, it becomes quite clear later in the article that Native women were also subordinate to the men, they just filled different places in society than English women did in English society.

Later in the article, Brown shifts suddenly to talk about Indian men’s social and work roles and how they change after the coming of age ceremony, however she does little to establish pre-coming of age roles and how these things might have shifted. It seems like an odd anecdote to throw in, since although it discusses gender and Native gender perception and roles, it just sits there without explaining much about the shift in dynamics or relations with either women or the English, other than to say that “…men’s social and work roles became distinct from women’s at the moment of the huskanaw–a male rite of passage–and remained so until the men were too old to hunt or go to war,” (15). While this presents an interesting introduction to the Indian idea of manhood and masculinity, I wish it had been compared in any way to either Native female coming of age, or English male coming of age rites and how they defined gender roles. I wish in general that the article had explained more how children were viewed and what their roles were (in terms of gender), and also how older women were viewed and treated in Native communities.

Throughout the article, I found it hard to tell what the author’s stance was on Powhatan. She describes him alternately as a strong leader who united different tribes, and a seemingly crucial force behind the increase of patriarchal ideas in Algonquian-speaking culture. He may have been both these things, but it makes it difficult to understand exactly how much he was or was not responsible for both the Native shifts in gender roles and the English actions and reactions. Had he ruled differently, would the colonization of Virginia looked different?

While overall an interesting article, there were several issues with it. The structure seemed to wander from one topic to the next and while these may have been connected, the transitions seemed weak and the added anecdotes (Spelman, for example), seemed off course. Because of this, I had to wonder if all the information she included was relevant to the argument and the issue. Were there things not included that may have served the piece better? I have to wonder, and wish I could read the other articles in this book to more fully understand these relationships.