Judy Yung’s “Unbound Feet:  From China to San Francisco’s Chinatown” tells three very different stories of women immigrating from China to the Bay Area in the early twentieth century.  She focuses on three different young women. The first, Wong Ah-So, who was promised a husband and instead forced into prostitution, which was very common in Chinatown at the time due to the gender imbalance amongst Chinese immigrants at the time.  The second, Law Shee Low, is also promised a husband, and receives him. Together they work hard to provide for their eight children in a one room tenement, with no interaction outside of San Francisco’s Chinatown. The third, Jane Kwong Lee arrived on her own, but with the support of her family, who are part of China’s upper class.  They help support her as she continues her education, until she receives her doctorate. There is not much these three women have in common, besides being from China and having a common dream- that moving to America will give them a better life. 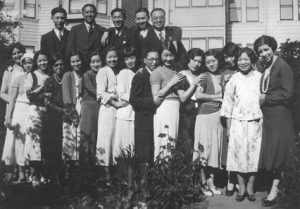 Young women and men from the Chinese Presbyterian Church in San Francisco.

It has been almost a hundred years since these three young women immigrated to the United States, but not much has changed.  The US government is still attacking immigration legislation that specifically affects immigrants from Asia. Instead of the Chinese Exclusion Acts, President Trump is cutting down on “chain migration”, severely limiting the amount of family reunification visas that are permitted.  This type of visa is the number one way Asian immigrants enter the United States. This specifically affects Asian women, as they are less likely to receive working visas as Asian men are.

Wong Ah-So’s story is particularly common today, with four percent of the women being brought into the country for human trafficking purposes, whether for sexual or forced labor purposes, being from Asia.  This is significant as only a little over five percent of America’s population identify as Asian.  These young women, often under the age of eighteen, are promised better opportunities for work, making higher wages to send back home to their families, along with better educational opportunities.  Like Wong Ah-So, who was rescued from prostitution by the Presbyterian Mission Home, a quick Google search shows that a large amount of anti-human trafficking organizations are faith-based, often different Christian faiths.

Law Shee Low’s story is also seen today.  Women from all over the world are starting to become mail-order brides, a wife that can be ordered online, in attempt to gain access to the United States.  The main reason for a woman to become a mail order bride is to raise her socioeconomic status. The largest percent of mail-order brides come from Asia, mostly the Philippines.  Forty percent of these women are under the age of twenty-five.  Fortunately, there are also a lot of women like Jane Kwong Lee, who leave Asia to further their education in America.  Temple University has a large population of Asian women here from China, but they are also being supported by their upper class families back home, and that is not an option for a lot of women. 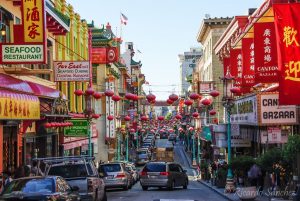 San Francisco’s Chinatown today.  Chinatowns are still important resources for Asian immigrants across the US.