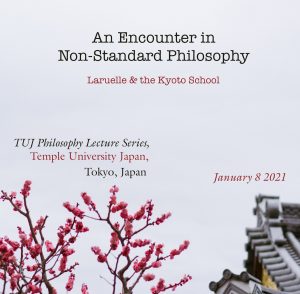 You are invited to a lecture on June 27 by David W. Johnson, professor of philosophy at Boston College, USA. This lecture is dedicated to Japanese philosopher Watsuji Tetsurō’s (18891960), vision of being human as an individual and collective way of being. Human beings are given over to an inescapable relation to specific others and to wider social structures. This relational mode of being allows the self to be absorbed into a social whole, as well as to distinguish itself from it as an individual, in a continually oscillating movement of interaction. Human beings are thus both individual and social; they are hybrid beings. In this talk the speaker will provide an explanatory account of this hybrid structure and explain the philosophical significance of the dialectical relation that underpins it: this dialectic and the demands imposed by it provide ethical life with its essential aims and scope.

This TUJ Guest Lecture is organized by Jordanco Sekulovski.

The TUJ Philosophy Lecture Series is a non-profit forum of Temple University, Japan Campus (TUJ) for the promotion of critical thinking. The lectures are free, open to the public, and feature speakers from universities around the world. The lecture series is a great way to learn about recent research in philosophy and in the humanities as a whole.

Talk at the 3rd Conference of the European Network of Japanese Philosophy in Paris, November 2nd, 2017.

This presentation explores Watsuji’s Rinrigaku as a form of ethics in the study of Ningen (Human being) and analyzes Watsuji’s model of critique of western individualism and ethics based on the actions and decisions relating to subjective consciousness. Watsuji finds the individualistic conception of a human being to be a fundamental part of the modern world. In his view, the western culture and its individualist approach consider the individual at the center of all modes of existence which it then substitutes for the totality of human existence (the totality of ningen). According to Watsuji this view of the world through the lenses of an isolated ego is the starting point of modern western philosophy.

Watsuji postulates that the locus of all ethical problems lies not in the consciousness of the isolated individual, but precisely in the in-betweenness (aidagara) between person and person. From there he builds his argument that ethics is the study of ningen, where precisely this in-betweenness among individuals is what allows us to rethink the concept of ethics and move away from the individual-centered ethics that runs deep in the philosophical traditions of the West. Ethical problems cannot solely be taken at their source by relying on the individual experience and contemplative efforts, but in the in-betweenness of person and person, therefore ethics cannot be regarded as a discipline that solely defines regulative principles and clarifies moral responsibilities among fellow human beings but should be regarded as a study of Man (ningen) going beyond the simple judgement of his moral actions or agency.

The perception of an isolated ego as a starting point of modern thought where the emphasis is put on the role of human beings as contemplating subjects represents a departure from what Watsuji refers to as a concrete human existence. Watsuji, claims that ethics cannot be solely a matter of individual consciousness alone but rather something of a more relational and interdependent nature. Therefore it is important to stress the importance of the notion of aidagara as the locus of ethical problems in Watsuji’s ethics which lies not in the consciousness of the isolated individual, but precisely in the in-betweenness of person and person. Finally, we will assess Watsuji’s analysis of the notion of rin or kâta (form) – rin as in kimari or kâta, or simply order among human beings. This presentation tries to explore the relationship between these notions and their modern-day relevance.

Presentation by a professor of philosophy at the University of Konstanz and the editor of the Journal of World Philosophies, Monika Kirloskar-Steinbach. In this session, she analyzes structures currently prevalent in academic philosophy. A critical examination of these structures indicates that cross-cultural philosophy finds itself in a relationship of dependency with its mainstream counterpart. The latter seems to set the terms of participation of the former. This asymmetrical relationship not only impacts the way cross-cultural philosophy is integrated into the discipline, it also deeply affects the manner in which cross-cultural philosophical knowledge is produced. In an attempt at remedying this monological orientation, the presentation examines Nishida Kitarō’s reflections on the place of dialogue and concludes that some of Nishida’s reflections do indeed seem to be able to counter this domination, thereby making a case for a sustained study of world philosophies.

Jin Y. Park, professor of philosophy and religion at American University Washington D.C. brings together the Buddhist ideas of dependent co-arising, emptiness, suffering and compassion, and Jacques Derrida’s discussion of trace, justice, and violence—on the issue of “learning to live.” Professor Park explores the demarcation of the animal and the human, the beast, and the sovereign; and take into consideration how the comparative philosophy of deconstruction and Buddhism are able to contribute to our understanding of how to live a meaningful life in the politically and socially turbulent world of today. This is the second event in the “TUJ Philosophy Lecture Series,” organized by Adjunct Professors Jordanco Sekulovski and Takeshi Morisato. Please come and join us for this lively discussion moderated by Prof. Sekulovski. This event is supported by the Embassy of Korea in Japan and the Korean Cultural Center.

This lecture investigates the unsaid in Immanuel Kant’s “Critique of Pure Reason” as well as the possibility of a certain philosophy of language, history, and logic. Professor Marc Peeters from the Université libre de Bruxelles in Brussels, Belgium, TUJ adjunct professors Jordanco Sekulovski and Takeshi Morisato, and translator and Ph.D. candidate Pierre Bonneels discuss the publication of the latest work by professor Peeters“L’Architectonique – Kant et le problème logique de l’ontologie dans la Critique de la Raison Pure”, published by Chisokudo Publications in the book series “Studia Philosophica” edited by professor Sekulovski. The program includes an Introduction by professor Morisato, an in-depth presentation of the book by professor Peeters and a panel discussion moderated by professor Sekulovski.