Constructing “Bad” Electrical Users: Centralized Electricity Supply in the Early US Grid and Discourses of Development

Health Without Papers: Immigration, Citizenship, and Healthcare in the 21st Century 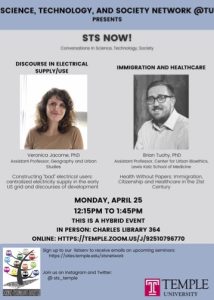 The Maternal Imprint: The Contested Science of Maternal-Fetal Effects 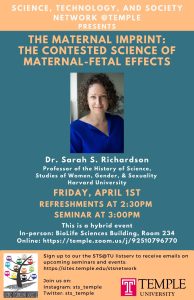 A Discussion of Our Favorite Works by Robert K. Merton

Merton, 1942.  The Normative Structure of Science

Merton, 1957.  The Role-Set_Problems in Sociological Theory

Societal Impacts of Nuclear Energy: An Introduction to STS

Working Maintenance and Repair into Science and Technology Studies

A Conversation on Kuhn’s The Structure of Scientific Revolutions

Artificial Intelligence and Machine Learning can improve all aspects of our lives… Could it also replace us?

Modeling the Mind: From Buddhism to Artificial General Intelligence

A panel discussion on gene drive: On the fate of species via genetic manipulation

Susan Lindee (History and Sociology of Science, University of Pennsylvania)

Virtual chat with the STSN@TU at the Center for Humanities

Miriam Solomon (Philosophy) Evidence and Values in the DSM 5.X

Allison Hayes-Conroy, Carol Brandt, and Rob Kulathinal will present their ideas for a grant proposal

Round Table on “Sokal Squared” controversy

“Medical Authority in the Age of Smallpox: Knowledge Networks in Central Europe”

The Bio-Social Partnerships graduate studio promotes collaboration and transdisciplinary research training across life sciences and social sciences, using the human body as a boundary object to bridge these domains.

Tania Jenkins presented work coauthored with Susan Short (Brown University) that uses intersex as a case for theorizing the role of resistance in the sociology of diagnosis.