Temple University Theaters proudly presents from October 12th – 20th at Tomlinson Theater the epic musical Oklahoma!, in celebration of the 70th anniversary of this American classic. Employing a cast of 35 and a full orchestra from the Boyer College, the performance bursts with enthusiasm, creativity, and talent.

Garrick Morgan as ‘Curly’, and Mary Guarnieri as ‘Laurey’ in Oklahoma!

Set in the Oklahoma Territory around 1900 just before Oklahoma becomes a state, Oklahoma! centers around the love triangle between the farm girl Laurie, the cowboy Curley, and the cowhand Jud Fry.  A second comic love triangle is added to the mix with Ad Annie, her boyfriend, Will Parker, and a traveling peddler.  Within the framework of these love triangles, Oklahoma! tells the story of a changing society and nation, and a western territory full of optimism in the face of challenges.  Musically, Oklahoma! presents a delightful array of melodies that have become American classics such as  Oh, What a Beautiful Morning, People Will Say We’re in Love,  The Surrey With The Fringe On Top,  and the rousing finalé, ‘Oklahoma’, to name a few.  Visionary choreography by Agnes De Mille, blending ballet with American dance forms, integrates dance into the story line for the first time. The design team for the Temple production, headed by prize-winning designer Marie Anne Chiment, creates a set for the Temple production that is beautiful and inspired, innovative and original, yet at the same time fitting in with a traditional production.

Kendyll Young as ‘Ado Annie’ and Cameron Scot Slusser as ‘Will Parker’ in Oklahoma!

The first collaboration between Richard Rodgers and Oscar Hammerstein, Oklahoma! opened on Broadway on March 31st, 1943 to immediate critical acclaim, and won the 1944 Pulitzer Prize for drama.  Oklahoma!  is based on the play Green Grow the Lilacs by Lynn Riggs, which had its New York premier in 1931 and was revived in the Westport Country Playhouse in 1940 with choreography of square dances by Gene Kelly.  Richard Rodgers and Oscar Hammerstein discuss their creative processes for the musical Oklahoma! in the following articles in the New York Times.

Hammerstein, Oscar.  Re ‘Oklahoma!’: The Adaptor-Lyricist Describes How the Musical Hit Came Into Being.  New York Times May 23, 1943.  Hammerstein gives insight into the birth of the musical, and the particular challenges they had to overcome.  With Hammerstein living in Doylestown, Pa., and Rodgers living in Connecticut, they would have lunch in New York City twice a week and then go back to their perspective homes to think about and incorporate what they discussed.  “We didn’t want to write second hand hillbilly ballads.  They wouldn’t be as good as the real ones.”

Rodgers, Richard.  Mr. Rodgers Insists That it Ain’t Luck: It Ain’t Luck  New York Times August 1, 1943.  Rodgers explains his decisions for his using a full orchestra, and how he came up with delightful orchestration, substituting the harp for the piano, and including a full string section.  He speaks specifically about the process he used in composing the song Oh, what a Beautiful Morning.

Contemporaneous reviews of the original production include:

Downes, Olin.  Broadway’s Gift to Opera: ‘Oklahoma’ Shows One of the Ways to an Integrated and Indigenous Form of American Lyric Theatre.  New York Times, June 6, 1943. 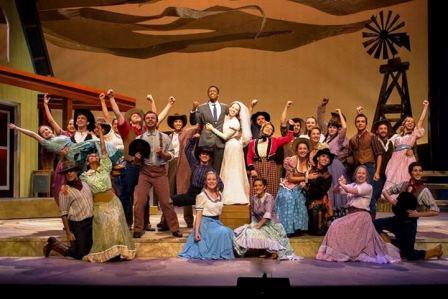 Tickets for Temple University’s outstanding production of Oklahoma! can be acquired at TicketLeap.

For more information about Oklahoma! the musical, see:

Share and Enjoy:
This entry was posted in Performing Arts News and tagged dance, Highlights, music, Performing Arts, Temple University Theater, theater. Bookmark the permalink. Trackbacks are closed, but you can post a comment.