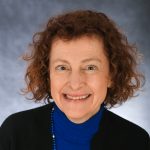 Professor Solomon was awarded a Guggenheim Fellowship for 2019-20. She will be spending the year at Cambridge University, as a Visiting Scholar at the Department of History and Philosophy of Science and a Visiting Fellow at Clare Hall.

Professor Solomon is a graduate of Cambridge University (BA in Natural Sciences, 1979) and Harvard University (PhD in Philosophy, 1986).  She is the author of Social Empiricism (MIT Press, 2001), editor of several special journal issues, and author of papers in epistemology, philosophy of science, philosophy of medicine and biomedical ethics.  Her recent book, Making Medical Knowledge, was published by Oxford University Press (UK) in April 2015.  It discusses evidence-based medicine, medical consensus conferences, narrative medicine and translational medicine.  The Routledge Companion to Philosophy of Medicine, edited by Miriam Solomon, Jeremy R. Simon, and Harold Kincaid, was published early in 2017.

Professor Solomon serves on the Temple University Hospital Ethics Committee and is a Fellow of the College of Physicians of Philadelphia.