What is research? And how exactly is that concept made manifest?  As members of an academic community, we may think of research as a culling—one gathers information from a static collection of preexisting “facts”, and uses said facts as supporting evidence in the construction of an original thesis. That thesis is then articulated, filled out, augmented with the appropriate research materials, and, often, rendered formally in print.

However, after attending Temple’s Undergraduate Research Forum/Workshop Symposium (aka TURF-CreWs), held in the Howard Gittis Student Center on April 18th, it’s clear that research can be a far more fluid enterprise than its face value definition suggests.  Composed of the research projects of 130 undergraduate participants from all of Temple’s colleges, the forum offers these students a setting in which to display and present their ongoing projects. From papers to posters to panels to performances, a wide range of subjects were on exhibit for the Temple community to not only observe, but to engage with as well.

At the event, I was able to speak with three students from three different Temple colleges, whose respective research interests engendered three different approaches to the research process—some traditional, some more creatively employed, but all immanently remarkable.

Andrea Gudiel, Biology: “Deforestation and the Spread of Invasive Species”

While assisting with a graduate student research project  during a field work trip to Madagascar , Andrea found herself focusing on the effects of local human use in her immediate environment. Built infrastructure, such as roads and trails, along with various invasive flora and fauna species, were causing tangible changes within the Madagascan ecosystem.  Though internet connectivity was precarious in her location, she was able to discern a lack in written research in this specific area after conducting preliminary searches. This lack, then, Andrea decided to take up and address herself. Since her trip, Andrea has utilized various library databases—including Web of Knowledge and Gale—to flesh out her  field work. Though still in progress, Andrea told me she hopes to submit the finished project to an international bio-diversity journal for publication.

I was drawn  to Daharis’ poster because its primary subject matter, The High Line Park in New York City (check out the website HERE if you’re unfamiliar with the park), is, in and of itself, very interesting. Daharis’ engagement with the park, though, added several dimensions to its appeal: her poster posed the questions, Do these types of spaces promote diversity within the community?  Within their respective communities, are they perceived as inviting spaces, or as marginalizing? Thinking of the High Line as one of the first “repurposed urban spaces” in what is becoming an emerging trend (including in our own Philadelphia!), Daharis sees these spaces as sites, “networks”, in which social, economic, and cultural intersections are enacted, redefining ideas surrounding urban areas and community engagement.  As of now, Daharis’ footwork has been interdisciplinary and research-based, looking at work in fields such as urban studies, sociology,  and her major, communication. This summer, Daharis will be in New York  conducting on-site research (she hopes to interview parkgoers) and incorporating an experiential aspect into the solid research-based foundation she’s established. 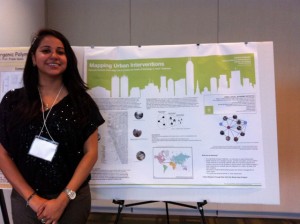 Daharis and her High Line poster

After being commissioned to write two neo-baroque concerti for bassoon by a fellow composition student, Kenneth began the task of composing. Aided by a Diamond Scholars Research grant, he started at Paley, where he studied a variety of concerti from the baroque period for bassoon and other instruments. With these materials in hand, Kenneth analyzed the key, tempo, meter, and length of the pieces he found in the library, identifying patterns in the scores. Vivaldi’s 10 Bassoon Concerti  in particular was an important resource.  In the process, he found he had to move out of his familiarity with writing specifically for bassoon, learning how to write in baroque concerto form.

During his panel presentation, Kenneth showed us his early drafts, each subsequent draft moving toward becoming “less imitative and more inventive”.  Of his process of composing, Kenneth said, “…I began twisting my baroque-influenced ideas into a more modern shape by playing with meter and introducing unexpected dissonances.” He describes his work as moving toward “Vivaldi through a prism—exploded and refracted.” The concerti now completed, Kenneth was kind enough to share a video of their performance. Take a look below!