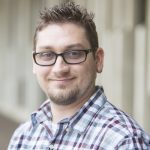 Jordan Hample got a taste for gaming at Camden County Community College and then moved on to study computer science at Rowen University. After working in the Camden County Library System’s IT department and establishing an independent gaming company with friends (Semag Company), he saw that Temple was hiring for its digital scholarship start-up. Jordan has now been with the Temple University Libraries since 2015. Once we had all made the 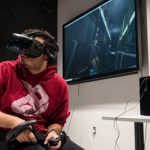 A student uses a VR headset

transition to Charles Library in the late summer and fall of 2019, Kristina DeVoe and I decided to interview Jordan to find out what in the heck he does and what’s going on in that Loretta C. Duckworth Scholars Studio (web site / blog). Do they have lightsabers? What about transporters? Are there strange bursts of light and otherworldly sounds emanating from that zone on the third floor? What does all of this have to do with education and research? OK, so maybe it’s an exaggeration to say that Jordan was an international man of mystery, but we were nevertheless a little uncertain about 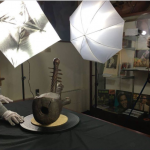 Photogrammetry in the Scholars Studio 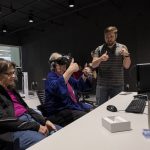 what he does. It seems likely that in our positions as librarians supporting multiple academic departments that we will need to work more closely with the Scholars Studio in the future. So, not only was this interview fun but it was also important for us.

Both of these engaging and informative interviews provide a nice introduction to the work of the Loretta C. Duckworth Scholars Studio through the eyes of one of its founding members. In the first interview he discusses the Scholars Studio and his role in it (3:54-6:33), the VR / Visualization Studio (6:34-8:35), play and gaming in education, plus eSports (8:50-12:23), and outreach (12:26-22:30), among other topics. 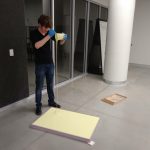 In the second interview Jordan first describes working from home. Then he explains in detail the role that the Scholars Studio played in collaboration with the Tyler School of Art and the College of Engineering to produce personal protective equipment (PPE) for the Temple Hospital System for the COVID-19 emergency (7:55-18:20) (special shout out to David Ross). Though the COVID-19 pandemic has been a terrible tragedy, it is rewarding to know this new organizational structure within Charles Library has been able to play such an important and lifesaving role, which is all the more reason to take some time to listen to Jordan’s experiences and insights.

These interviews took place on January 6, 2020 and June 8, 2020. We’d like to thank Jordan Hample for his cooperation.