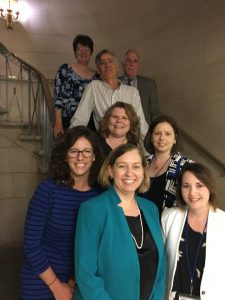 I attended the American Library Association’s 2017 National Library Legislation Day (NLLD) in Washington DC on May 1 and 2 and found it quite a rewarding experience. The interest in NLLD this year was particularly high and registration filled up early. This is not surprising since so many of the values that librarians hold dear are under threat. I met some really interesting public librarians from around the state of Pennsylvania. Listening to them speak about their work supporting and educating their communities renewed my faith in the importance of libraries.

NLLD is a two day event. The first day is a briefing on the legislative agenda of ALA and the second is devoted to outreach to congressional representatives and senators. On the morning of the second day I met (along with Christi Buker, Executive Director of the Pennsylvania Library Association) with a legislative assistant of my representative to the 1st District, Robert Brady. In the afternoon we Pennsylvanians split into two groups and visited legislative aids to either Senator Toomey or Casey.

We presented and discussed the pressing issues of the ALA, the most important of which this year is funding. The Trump administration’s proposed 2018 budget zeroes out all federal funding for libraries. The ALA is proposing a budget of $186.6 million for libraries. (To put this federal funding for libraries in perspective, this amount would be .029% of the proposed Department of Defense spending and .423% of Department of Homeland Security.)  Beyond funding, here are the priority issues that ALA is asking Congress to support: