Large sports arenas are perhaps one of the most inefficient land uses out there. Large buildings, used for a handful of days a year, with oversized parking lots and traffic nightmares for the community. Since my days taking classes with David Harvey at Johns Hopkins — when we spoke about all the problems with the (then) newly opened Oriole Park at Camden Yards — I have been critical of this wave of publicly funded stadium construction. 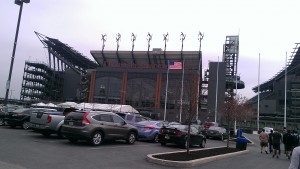 So I was a bit skeptical back in late 2010 when the Philadelphia Eagles were trying to be the first net-zero energy stadium. Then, when the deal with SolarBlue fell through, I wasn’t surprised. But last spring, the Eagles once again announced a plan to install solar and wind facilities at Lincoln Financial Field — this time with Princeton-based NRG. And this time things are moving forward. 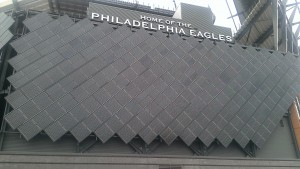 I had a chance today to take a tour of the stadium, as part of the Campus Sustainability Week activities here at Temple. And I have to admit that I was impressed. A few details:

The result: 99.89% of waste is diverted from landfill.

Now, all of this isn’t going to make me an Eagles fan, but I have to say I’m very impressed by their result at Going Green.

2 Replies to “Sustainability and Sport”