In a recent Washington Post story, staff reporter Amy Gardner reminds us that history museums play a vital role in ongoing debates about nation and citizenship. Virginia’s Colonial Williamsburg has witnessed a recent wave of Tea Party activists who’ve come to cheer on Patrick Henry and follow George Washington to battle. These Tea Partiers find in Williamsburg’s story a historical parallel to their own struggle against high taxes and big government. Gardner reports that the Tea Party worries that the nation has drifted from its founders’ ideals. Those who’ve “forgotten about America,” proclaims a retired plumber from New York, “should come here [Colonial Williamsburg] and listen.”

Novel as it may seem, this episode recalls an earlier moment in the history of American museums. Museums like Colonial Williamsburg, the kind that mingle history lessons with restored buildings and costumed guides, became wildly popular in this country at the turn of the last century. They appealed especially to middle and upper class white Americans who were concerned that decades of labor unrest, combined with an onslaught of foreign immigrants, and the lingering complexities of Reconstruction threatened to obscure what really mattered in America. Colonial Williamsburg was born amid and of these worries during the late 1920s. Americans marveled at the new museum in a dramatic color photo essay printed in a 1937 issue of The National Geographic Magazine. One picture featured two black children flanked by British Redcoats and “up to their ears in watermelon.” “There is one custom,” the caption continued, “that time has not changed.” 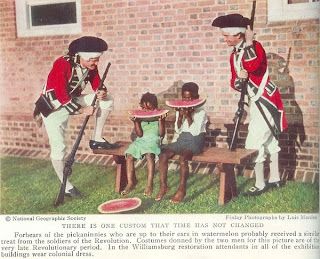 Much has changed, fortunately, in the intervening decades. Colonial Williamsburg has worked hard to ensure that the jingoism at play during its early years is kept at bay—and even scrutinized from time to time—by serious hard-won critical history. As Gardner reports, Tea Partiers are sometimes rebuffed by a George Washington who is neither as religious nor as quick to revolt as they expect. Keeping the record straight, however, is a constant challenge in a nation where public memory and politics are synonymous. Consider, for instance, the anti-immigration VDARE Foundation that takes its name from Virginia Dare, the celebrated first English (read: white) child born in America. VDARE, like the North Carolinians who opposed suffrage for Black women during the 1920s “in the name of Virginia Dare,” offers just one more example of change-fearing Americans looking to history for constancy and affirmation—precisely what the Tea Partiers expect to find at Colonial Williamsburg.

The persistence of that expectation is bad news for historians because it shows us that we have largely failed to educate the public that change is, in fact, the essence of history. Although Colonial Williamsburg’s president hopes that visitors leave “having learned something about the nuance and messiness of history,” the influx of Tea Partiers suggests that Americans who distrust change still seek solace there. Museums have become much better in recent years at challenging our expectations of the past. I wonder, though, when the rest of our nation’s historians will join the effort in earnest. With important exceptions, I’m shocked by how few credentialed historians share their expertise with local museums. I’m surprised even more by how many fewer initiate those conversations. Why is it that more of us don’t introduce ourselves to the good people who run our local museums? Why are there so few professional historians on the boards of small museums? Is it that we expect to be asked? To be paid?

Colonial Williamsburg already has its share of historians. The audience that needs us most is waiting at those of our small community museums that can barely pay the bills, let alone respond to the most complicated political questions of our time. Because they can’t afford to come find us, it’s up to us to take the first step. George Washington didn’t win as many battles as we’d like to think. He’ll lose this one too without some help.