Johnny Mercer (1909–1976) worked as an actor, singer, songwriter, and businessman, but was best known for his genius as a lyricist.  At the age of 19, Mercer moved to New York to pursue a career as an actor and singer, but soon was writing lyrics to Broadway reviews such as  ‘Out of Breath and Scared to Death of You’ in Garrick Gaieties (1930), and Americana (1932).  In 1935 he moved to Hollywood where he worked with Harold Arlen, Hoagy Carmichael and Henry Manicini.  His first Hollywood hit song ‘I’m an Old Cow Hand’ (performed by Bing Crosby in Rhythm on the Range) was followed by scores of hit songs such as ‘Goody Goody’,  ‘Hooray for Hollywood’, ‘Jeepers Creepers’, ‘You Must Have Been a Beautiful Baby’, ‘Day In-Day Out’, ‘Ac-Cent-Tchu-Ate The Positive’, ‘Glow Worm’, ‘Blues in the Night’, ‘I Remember You’, ‘Fools Rush In’, ‘Come Rain or Come Shine’, and many more.  In the 1940s, Johnny Mercer was the director of ASCAP,  the American Society of Composers, Authors and Publishers, that licenses and advocates for American songwriters and composers.  And with Buddy De Sylva and Glen Wallichs, he founded Capitol Records.  Nominated for 19 Academy Awards, Johnny Mercer won four in the best song category:  ‘On the Atchison, Topeka and the Santa Fe’ (1946, music by Harry Warren); ‘In the Cool, Cool, Cool of the Evening’ (1951; music by Hoagy Carmichael); ‘Moon River’ (1961 for Breakfast at Tiffany’s, music by Henry Mancini); and ‘Days of Wine and Roses'(1962, music by Henry Mancini).

Check Out a Video!

Clint Eastwood Presents Johnny Mercer: the Dream’s on Me.

Blues in the Night 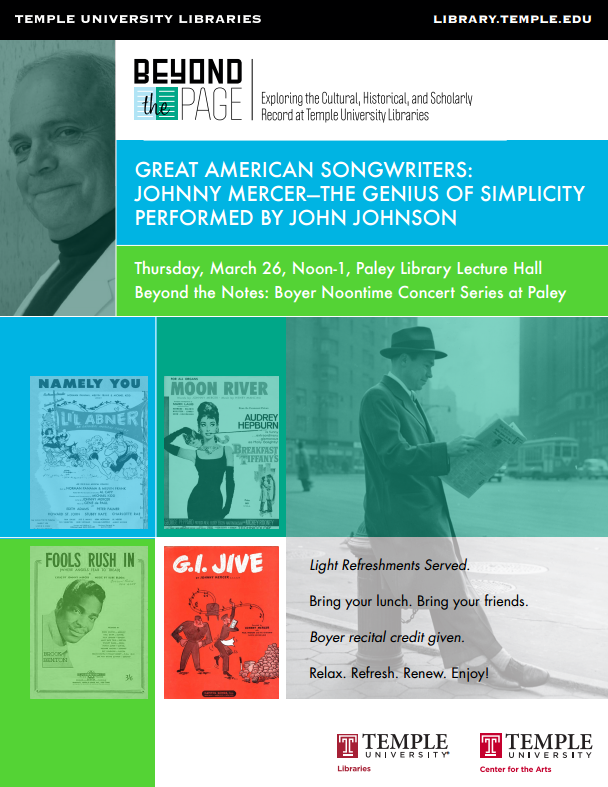 One response to “Genius of Simplicity: Johnny Mercer”