What Does the Fox Say?

We have words for sounds of many creatures in the animal kingdom, but our vocabulary lacks an appropriate expression for the sound of a fox. What does the fox really say?  What sound does the animal, the fox, make? Serious minded people want to know.

The answer, at least for the red fox,  is kindly provided by the State of Connecticut Department of Energy & Environmental Protection:

“Foxes are quite vocal, exhibiting various barks, howls, and whines. The sounds vary from a short, sharp “yap” or bark, followed by a “yap, yap,” to a combination of screeches, yells, and long howls. A common report to the DEP Wildlife Division involves the sounds made by red foxes (e.g., a raspy, single syllable scream or bark, repeated regularly every 3-10 seconds).”

Want to find out more about the viral video?  You can look at the popularity in numbers for this hit by the Norwegian band Ylvis in this article from Billboard Magazine, or read an interview with Bård Ylvisåker of Ylvis.

“Red Fox,” from the State of Connecticut Department of Energy & Environmental Protection

*“Fox,” from All Things Chaucer in Credo Reference.

Fantastic Mr. Fox (DVD in Media Services)  or the book by Roald Dahl.

*Aesop’s Fables streaming audio, narrated by Lois Lane, “Freddie the Fox,” and “The Fox and the Goats”  from the database L.A. Theatre Works.

*The Fox, from Jazz Music Online, played by the Antonio Ciacca Quartet.

*The Fox and the Crow, American folk song performed by Doug Elliott from Music Online.

*Fox on the Run, music from the film Dazed and Confused, performed by Union of Sound, in the database Music Online. 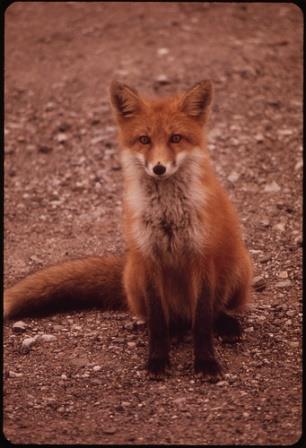