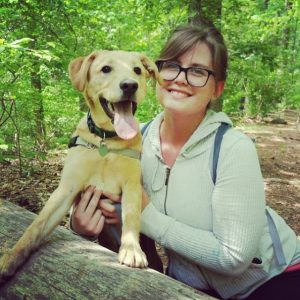 Amy Defibaugh earned her Religion PhD at Temple University in 2018 with a doctoral dissertation titled An Examination of the Death and Dying of Companion Animals. She now works in the College of Liberal Arts as the director of graduate affairs. She is the author of “Macey’s Ashes: After-Death Care of Companion Animals as Interspecies Family,” which appears as a chapter in the recently published anthology Feeling Animal Death: Being Host to Ghosts (Rowman & Littlefield, 2019). In the words of editor Brianne Donaldson, the authors of Feeling Animal Death “explore feelings and emotions associated with animal death as catalysts for personal development, for professional and activist efforts, and generative of new linkages between ideas and ethics.” “Macey’s Ashes,” adapted from material in Defibaugh’s dissertation, examines contemporary methods of burial and memorialization of companion animals.

For Defibaugh, the human-animal relationship is a personal as well as intellectual engagement. Having grown up on a Central Pennsylvania farm, non-human animals were always a big part of her life and they remained so as she made the transition to city life. In her doctoral program, her intellectual focus came in part from her graduate teaching of the popular religion course Death & Dying, where she decided to primarily address issues concerning the death and dying of non-human animals. In this course, she and her students…

discussed the destruction of animal habitats caused by human activity that resulted in the depletion of myriad species; [they] examined poaching, hunting, and deforestation. We studied the techniques and modes of animal death, particularly in factory farming, animal shelters, and veterinary clinics. [They] deliberated over the meanings of euthanasia.

But her students were far and away most engaged when discussing the deaths of companion animals (the household dog, cat, rabbit, turtle, or snake). This stimulated Defibaugh’s interest in understanding more about this very intimate relationship. There appears to be a vast untapped reservoir of emotion humans feel towards their non-human companions that is expressed in many different public and private ways and this is among the things that Defibaugh studies.

I spoke to Amy Defibaugh on October 17, 2019 in the Charles Library in Temple University.