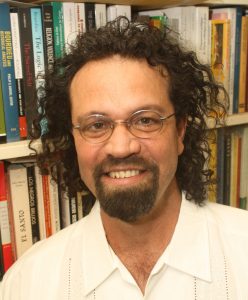 In the second part of my interview with Professor Terry Rey on his new book, The Priest and the Prophetess: Abbe Ouviere, Romaine Riviere, and the Revolutionary Atlantic World, we leave Haiti and the Haitian Revolution behind. Romaine la Prophetess has disappeared and will soon perish in the flames of the revolution. That terrible conflict will continue alongside its European cousin, the French Revolution, until the early years of the next century. A hemisphere away, an exhausted Felix Alexander Pascalis Ouviere washes up on Philadelphia’s shores, having survived an attack on the British brig Catherine by a French privateer in Delaware Bay. Among his few possessions is a letter of introduction addressed to George Washington. Soon Dr. Pascalis will be treating yellow fever victims in that miasmic summer of 1793 in the company of such luminaries as Benjamin Rush. Abbe Ouviere is nowhere to be found.

Here is part two of my interview with Professor Rey. We spoke on September 25, 2017.