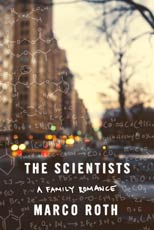 On November 15, 2012, I interviewed Marco Roth about his 2012 memoir The Scientists: A Family Romance, described by Lorin Stein of the Paris Review as

“…the first intellectual autobiography by someone our age in the searching nineteenth-century tradition of Edmund Gosse or Henry Adams: the autobiography equally of a reader and of a son, grappling with an inheritance that is both intellectual and emotional–and education for our times.”

I first met Marco Roth in October 2010 when I interviewed him and Keith Gessen about the founding of their literary magazine n+1, where both of them are currently editors.  Since Marco lives in Philadelphia, I run into him from time to time, and, hearing about his book, I asked him if he would talk to me about it. He kindly agreed. The Scientists: A Family Romance is a beautifully written book that I highly recommend.