Lithium-ion batteries have been used extensively in past decades in a variety of applications from portable devices to airplanes and electric vehicles. Battery packages used in electric vehicles experience dynamic loadings, shocks, and large deformations during normal operation as well as in a crash scenario. It is of paramount importance to battery manufacturers and the automotive industry to better understand how cells deform under such loadings and what conditions might damage a cell and lead to failure.

Research in Electric Vehicle Safety Laboratory (EVSL) is mainly focused on characterizing the mechanical behaviour of lithium-ion batteries, including cylindrical, pouch, and prismatic/elliptical cells. The mechanical properties of individual cell components (micro-level) as well as the entire cell (macro-level) are determined using various experimental methods and under various loading scenarios (uniaxial, biaxial, quasi-static, dynamic, etc.). Subsequently, finite element models are developed based on the obtained stress-strain relationships. The results of numerical simulations are used to predict the deformation and failure in the components and cells. These results are specifically useful in optimizing lithium-ion batteries and improving car safety. 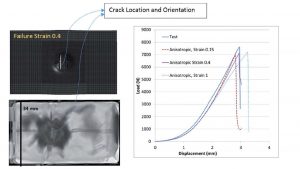 Simulation of Failure in a Small Pouch Cell

Most previous studies have focused on the mechanical characterization of lithium-ion cells and their components in quasi-static regime. One of the objective of our current research is to explore and characterize the mechanical properties of lithium-ion cells under dynamic loadings. The obtained constitutive laws are used to develop finite element models and study the cell deformation and failure. This is specifically useful in optimizing lithium-ion batteries under mechanical abuse conditions and improving safety.

A 3D micro model of the cell Representative Volume Element (RVE) is under development in EVSL. This model allows us to account for the anisotropy of each component and can be used to better understand the cell deformation and damage mechanisms under three dimensional loadings.