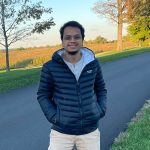 Wasim is from Kolkata, India. He received his master’s degree from Indian Institute of Technology (IIT) Guwahati where he worked in a Nanoscience Laboratory under Prof. Anumita Paul. In his master’s research project, he worked with a senior graduate student where they demonstrated that the luminescence of atomic clusters can be tuned by engineering of the surface ligands. Photo oxidation of the Surface ligands has been pursued to modulate the luminescence of the Clusters. This work got published in Physical chemistry chemical physics (PCCP) and selected as “2019 HOT PCCP ARTICLE.”

After that, Wasim worked as a project student under Dr.Uttam Manna at the same institute where he was working on making a Superoleophobic membrane that can be used for water purification from oily as well as dye contaminate water.

Right now, Wasim is working under the supervision of Dr. Eric Borguet where he along with a post doc is working on finding a suitable technique to characterize and understand the mechanism of binding of Oxide surface with SYMBA (Spiroligomer-based Synthetic Molecular Binding Agents). He is also working with a senior Graduate student, Datta, who focus on developing design principle and synthetic strategies of metal oxyhydroxides for the catalytic degradation of organophosphate nerve agent simulants.