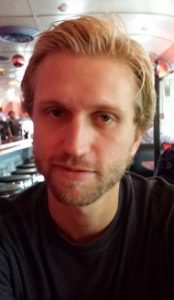 Stefan Piontek began his career in chemistry while pursuing a B.Sc. at Montana State University
working under Professor Rob Walker. His experiments involved synthesizing laser dyes to study molecular adsorption on quartz which was tracked via fluorescence spectroscopy. The structure of these molecular films was then investigated using time correlated single photon counting (TCSPC). This research sparked an interest in surface science and lead to his field of study for
his doctoral studies.

After graduation, he spent time in the photonics community of Bozeman (Montana) working for Altos Photonics Inc. as a technical sales and service engineer. While providing laser solutions and supplying optical components for research groups and companies in the Americas, he felt the need to be more directly involved in academic research again.

Stefan joined the Borguet Group in the fall of 2014, where he focused on the spectroscopy and vibrational dynamics of mineral oxide/liquid interfaces. His other projects involved plasmonic catalysis and generation of software for the calculation of electric field enhancements at various interfaces. His research aimed to reveal how ions structure water at alumina/liquid interfaces and the resulting effects on vibrational dynamics of interfacial water. Ultimately his work identified that Stark active molecular ions could be harnessed in SFG experiments to report the local charge of heterogeneously charged mineral oxide surfaces, which was not previously possible.

Following receiving a Ph.D in Physical Chemistry from the Borguet group, Stefan was awarded a 2 year FP-RESOMUS fellowship to perform surface specific vibrational spectroscopy on working electrochemical systems with the Petersen Research Group at Ruhr Universität Bochum in Germany. His project involves interdisciplinary collaborations in which sub 5nm gold electrodes are being fabricated and incorporated into SFG experiments. The goal is to overcome current engineering limits so that information on the orientation of electrolyte and the vibrational dynamics near electrochemical surfaces can be obtained under working conditions.