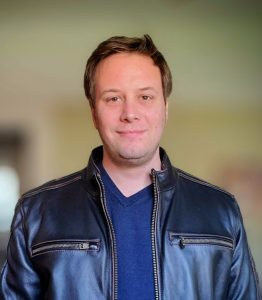 Sean was an undergraduate majoring in Film and Media arts when he joined the Borguet group in 2006, beginning his career in Chemistry. While with the group, he worked mostly with conductive AFM measurements and thin Pd film chemical bath deposition for hydrogen sensors.

Graduated in 2008, Sean went on to graduate school and a Ph.D. at the University of Chicago. There, he worked with Prof. Philippe Guyot-Sionnest, developing colloidal mercury chalcogenide quantum dots for mid-infrared applications, resulting in 10 publications (4 first author) and a patent.

He was a post-doctoral fellow at Brown University, where he investigated 2 dimensional nanomaterials, beyond graphene and metal dichalcogenides, with a focus on phase change memory and battery electrode applications.

In 2014, he started a position at Voxtel, Inc., where he is currently a Lead Scientist and works on developing a wide range of applications of nanomaterials.