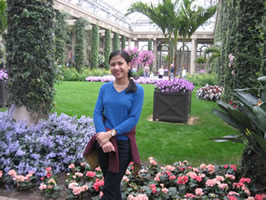 I was born and raised in Vietnam. I graduated from Economics University in HoChiMinh city and from Bentre College of Education in 2001. I worked as an accounting manager for 3 years in Viet Kien Thanh Company (NTN Japanese bearings distributors in HCM city). I came to the US in 2005 to study at Temple University. When I studied General Chemistry, it was the first time that I had an opportunity to set up experiments where I understood the chemical reactions in practice.

I joined the Borguet group in summer 2010 to work with other members on the project “Purification of carbon nanotubes by dynamic oxidation in air”.

Lan graduated with her Masters in Chemistry. January 2013.