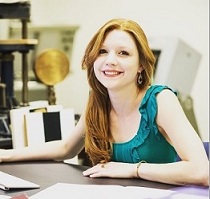 In 2016, Isabella earned her Bachelor’s degree in Chemistry at Saint Joseph’s University in Philadelphia. There she worked under the mentorship of Dr. Paul Angiolillo in the Department of Physics probing the charge and spin dynamics in meso-to-meso ethyne bridged (porphinato) zinc (II) oligomers (Pznn compounds) using computational approaches.

In August 2021, Isabella earned her doctorate in Chemistry (physical/analytical), where she developed expertise in materials and surface science.

Isabella’s research was part of a larger collaborative project between The University of Pittsburgh and Temple University, which focused on designing superior sorbents capable of capturing and degrading hazardous chemical agents, such as chemical warfare agents, with the ultimate goal of protective equipment for military personnel using multifunctional Metal-Organic Framework (MOF) nanomaterials. Her research developed fundamental insight on the temperature-dependent behavior of MOFs and MOF-analyte systems using in situ techniques under hostile environments of extreme temperature (100 K to 1400 K) and pressure (10⁻⁹ Torr), which led to three (3) publications, including two (2) as first author, and several others in preparation.

During her Ph.D., Isabella led the nanoporous characterization team within the Borguet group, supervising and mentoring several junior colleagues, many of whom have continued on to pursue advanced degrees in physical chemistry.

Outside of the laboratory, Isabella serves as the Chair of the Philadelphia Younger Chemists’ Committee (YCC) and as a founding member of the Eastern U.S. YCC Partnership. In this role, she has conceived, implemented, and executed initiatives designed to promote the success of early-career chemists through professional development workshops aimed to help navigate the challenges of the COVID-19 climate. Her mission is to expand the boundaries of leadership and teamwork to build a network of skilled and motivated young professionals that will empower and unite chemists in the community.