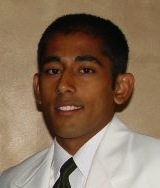 Aseem was born in India and immigrated to the United States in November of 2000. As a high school senior, Aseem was accepted to the Honors Program at Temple University on a full scholarship. Later on, he was accepted into Temple University’s Medical Scholars Program, which granted conditional acceptance to the university’s School of Medicine. Aseem majored in Biology with a minor in Religious Studies.

Aseem began working with the Borguet group as an incoming freshman in the summer of 2008. His work in the group included developing the NTI Cantilever Sensor Project and studying the surface chemistry of sensors to improve electrical insulation and affinity enhancements.

In October 2009, Aseem Malhotra was awarded a Creative Arts, Research And Scholarship (CARAS) by the Office of the Senior Vice Provost for Undergraduate Studies for the project titled “Surface Characterization and Calibration of Piezoelectric Microcantilever Sensor (PEMS) via Atomic For Mi

Aseem was awarded one of three Top Undergraduate Poster Prizes at the 5th Annual Undergraduate Poster Session sponsored by The Philadelphia Section of the American Chemical Society in January 2010. Aseem won for the poster titled “Surface Characterization of Piezoelectric Microcantilever Sensor (PEMS) via Atomic Force Microscopy and Fluorescence.”

In March 2010, Aseem was awarded an Undergraduate Research Incentive Fund (URIF) Travel Grant by the Office of the Senior Vice Provost of Undergraduate Studies. The grant covered all expenses for him to travel to California to present his research at the American Medical Student Association’s (AMSA) 60th National Convention. Aseem was accepted to present the poster titled “Detection of antibody binding events via AFM and fluorescence microscopy for calibration of piezoelectric microcantilever sensor (PEMS) response”

In 2012, Aseem studied abroad for 6 months at Lund University in Sweden. Soon after, he became an avid traveler, having visited most European countries and states in the United States.