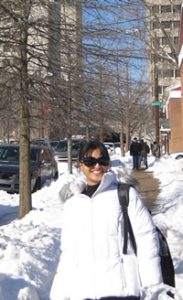 Devika was born in Kolkata, one of the busiest metropolis of India; also known as the City of Joy (Dominique La Pierre). After finishing high school, she went on to receive her Bachelors in Chemical Engineering from West Bengal University of Technology, which was still in its nascent stage.

After Devika obtained her undergraduate degree, she pursued a career in research. She enrolled for a post-graduate degree in Chemical Engineering at the University of Calcutta. University of Calcutta is one of the oldest universities in India and a very prestigious place to study. During her M.Tech, she worked on photocatalysis for environmental remediation. This led to 2-3 recent publications in both national (Indian) and international journals and conferences. This provided Devika with first hand experience on how nano sized particles do wonders compared to the micro sized particles, especially in the field of catalysis.

Upon graduating, Devika joined the Sol Gel division of the Central Glass and Ceramic Research Institute, a premier Government of India funded Research and Development Organization. Under the Council of Scientific and Industrial Research, she was a Junior Research Fellow working in the Department of Science and Technology; an India sponsored project. Her projects included the patterning of semiconductor gel films by employing confined self assembly for future use as planar wave guide sensors, fabrication of photonic crystals with potential application in solar cells, and preparation of core shell nano particles for use as advanced photo catalysts.

Within the Borguet research group, Devika’s interests were in the areas of nanofabrication, high resolution microscopy, and ultrafast spectroscopy.

Devika was awarded the ECS Colin Garfield Fink Summer Fellowship for the summer of 2012.

In Fall of 2015, she successfully defended her dissertation, “Synthesis and Applications of Plasmonic Nanostructures”. After graduation, she joined the National Institute of Standards and Technology as a Post Doctoral Research Associate.