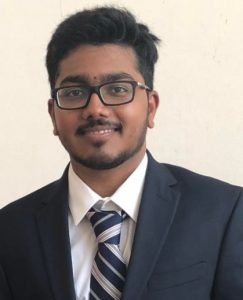 Venkata Swaroopa Datta Devulapalli (Datta) is a graduate student at Temple University, where he leads the Porous Materials and Catalysis team in Professor Eric Borguet’s research group. He is the first student in the IISER-TU Dual Masters Doctoral Degree (DMDD) program, a joint initiative between the Indian Institute of Science Education and Research (IISER) Pune, India and Temple University.

As an INSPIRE (Innovation in Science Pursuit for Inspired Research) research fellow at IISER Pune, he worked under the guidance of Dr. Ramanathan Vaidhyanathan to develop photocatalytic boro-carbon nitride (BCN) for water splitting applications. Having jump started his PhD career in 2017 via the DMDD, he received master’s degree in chemistry from IISER Pune in 2018 for his thesis work on understanding the sorption properties of covalent organic frameworks (COFs) utilizing temperature programmed in situ infrared (TP-IR) spectroscopy and temperature programmed desorption mass spectrometry (TPD-MS).

As a PhD student, Datta uses TP-IR to study the fundamental properties (e.g., stability, expansion) of 3 D porous metal-organic frameworks (MOFs), including their interactions with simple molecules, such as water and acetonitrile, as well as industrial chemicals such as CO2, NH3, and even nerve agent simulants. With the overall goal of developing hybrid MOFs that can capture and/or degrade toxic chemicals, he works closely with theoretical and experimental collaborators. Utilizing IR spectroscopy, he discovered novel NH-π interactions between the linkers of UiO-67 MOF and NH3, revealing a new class of binding sites in MOFs. In addition, his IR research identified the types of species present at UiO-67 MOF defect sites, which dictate the stability and catalytic activity of MOFs.

Datta also leads a team of undergraduates, who focus on developing design principles and synthetic strategies of metal oxyhydroxides for the catalytic degradation of organophosphate nerve agent simulants. Datta formulated and verified an activity hypothesis, which relates the activities of MOFs and their precursors (metal oxyhydroxides) for catalytic hydrolysis of a nerve agent simulant which can help in the rational choice of the optimum metal/MOF for the intended applications.