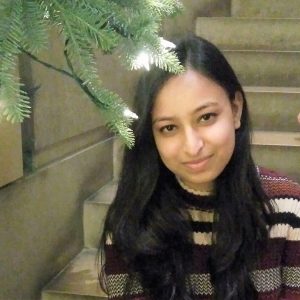 Bijoya was born and raised in West Bengal, India. She obtained her Bachelor’s in Science degree from Presidency University, Kolkata in 2015. She received her Master’s in Science degree from the Indian Institute of Technology (IIT) Kharagpur in 2017 where she worked in a computational research project with Prof. Pratim Kumar Chakraborty trying to understand the bonding interaction in superhalogen-supported noble gas insertion compounds.

She embarked on her Ph.D. journey by joining Dr. Eric Borguet’s research group in December 2017 as a graduate student to study interface chemistry and ultrafast dynamics using non-linear optical spectroscopy techniques of sum frequency generation and second harmonic generation. Her research primarily focuses on the investigation of structure, orientation and the H-bonding network at mineral oxide/water interfaces in the time and frequency domain.