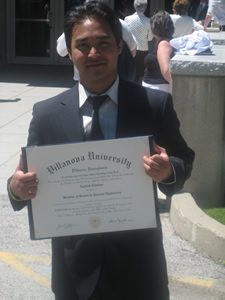 Aashish was born and raised in Kathmandu, the capital of Nepal. He finished high school at St. Xavier’s School, Nepal, which is the most renowned school in the country. In order to enhance his chances to study abroad, Aashish completed A-levels from Malpi Institute, Nepal. After finishing his A-Levels, he pursued a Bachelors degree in Chemical Engineering at Villanova University. During his undergraduate work at Villanova, he was involved in research for both the chemical engineering and chemistry departments.

For the chemical engineering department, the goal of his research was to investigate hydrogen production from glycerol, which required extensive quantitative/qualitative analysis of glycerol using Gas Chromatography (GC) and High Performance Liquid Chromatography (HPLC). For the chemistry department, his research was based on the study of functionalization of the surfaces of graphite nano-fibers. It was during this research project that Aashish developed special interest in the research field of chemistry, which eventually made him pursue graduate studies at Temple University.

In 2011, Aashish joined the Borguet research group. His research interests are in optics, nonlinear phenomena, surface chemistry, and nano-technology.

In Fall 2016, he graduated from Temple University with a Ph.D. in Chemistry. Aashish has now joined the Pacific Northwest National Lab (PNNL) to work with Dr. Jim De Yoreo and Dr. Hong-fei Wang to investigate the mechanism of crystal nucleation and growth using optical microscopy and non-linear optical spectroscopy.