This current investigation involves the time resolved study of arsenic (III) oxidation on the surface of birnessite. As (III) is toxic and mobile in soil and natural water bodies and the manganese minerals naturally present in environment serve as the potential surface which can undergo reduction reaction and oxidize the As (III) to As (V). As (V) being less toxic and more immobile compared to As (III) is adsorbed onto the manganese mineral surface and also co-precipitates with the reduced manganese.

Atomic force microscopy is a great analytical tool to study the morphology of any surface at nanometer scale. In our study, we have collected samples of birnessite exposed to As (III) solution, at regular intervals of time. The binessite particles were rinsed with DI water and imaged under AFM. The AFM images reveal the growth of a new phase on the particle topography, which we believe is due to the coprecipitation of As (V)-Mn (II) complex. This new phase on the particle surface starts appearing after 30 minutes of exposure time and there is a subtle increase in the Z-dimension of these features as well as the phase contrast. The phase contrast in tapping mode AFM imaging is a great technique to distinguish different materials properties.

After 45 minutes of exposure, the new features doesn’t seem to show any further changes as the exposure time is increasing. Although we believe, the coverage of these new features increases in X-Y dimension rather than in the Z-dimension.

As (III) exposed birnessite samples were analyzed with XPS, and time resolved speciation of the different oxidation states of Mn reveals important data for the kinetics which is in good agreement with the AFM data. CASA peak fitting software was used to fit and obtain a relative peak ratios of the manganese oxidation states as function of time.The figure shows the relative concentrations of Mn (II), (III), (IV) as a function of time. Careful analysis reveals that Mn(III) concentration increases and Mn(II) concentration stays same till 30 min, but after that there is a decrease in Mn(III) conc. and an increase in Mn(II), and at the same time we start observing a phase change in our AFM images. From this analysis we believe that there is no precipitation till Mn (III) concentration reaches certain concentration and after that as Mn (III) is further reduced, Mn (II) is released into solution and co-precipitates with As (V) as a complex phase. 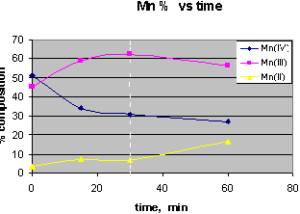