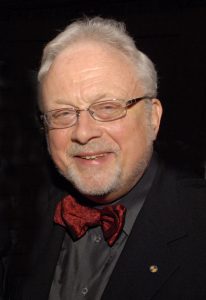 Like many other American composers who studied composition in universities in the middle of the 20th century, William Bolcom began his career composing serial music, the musical style most commonly associated with “atonality.” At that time, serialism was often seen as necessary tool to help composers avoid a tendency to recreate familiar patterns that represented a failed, oppressive system (Brindle 2003). Yet Bolcom gradually shifted toward employing a wider variety of compositional styles, often influenced by popular music. Today, composers and “new music” listeners and performers may see being forced into an academic, atonal style of writing as oppressive.  As a result, many of today’s younger composers have followed Bolcom’s lead into music that incorporates a wide variety of stylistic influences. Bolcom’s music, influenced by other forms of music, became the music for which he is known.  In this concert, we will hear some of his cabaret songs along with rags for piano performed by Boyer faculty.

In this 21st century, his work is still described as “running the gamut” of popular and classical musical styles (Lister 2006, 37). In an interview in The Opera Quarterly, Bolcom shares some fascinating details of his views on music:

Bolcom could be seen as a rejection of the typical 20th century conservatory ethos, of music as an end in and of itself. Even today, many of those of us who are music students have been told at some point in our lives that to be a good musician means to engross ourselves in “pure” music and to ignore the “extra-musical” aspects of our lives, as well as to see popular music as inherently artistically inferior. One could trace this back to the 19th century German debate over so-called “absolute music,” essentially the idea that music should transcend life and exist only for its own, purely aesthetic pleasure. To be fair, vocal music was not usually framed as “absolute music;” it typically has text which suggests something “extramusical.” But in recent decades, musicologists and ethnomusicologists have noted that “absolute music” was never really a thing at all. For example, Henry Kingsbury’s influential 1988 work—which was published by Temple University Press—shows how the very idea of classical music is itself always part of the construction of a social and cultural system. Bolcom’s embrace of the theatrical rather than holding on to some idea of sanctity of “pure” academic music is one of the things that makes his music especially fun.

The rags, too, of course, reflect influences beyond the world of classical music. Ragtime music is characterized in particular by its distinctive syncopated rhythmic structure. A 1992 review by Barry Hannigan, then a professor at Bucknell University, writes that “care and craft distinguish the [Bolcom] ragtime pieces, giving evidence of Bolcom’s classical training” compared to other ragtime composers. Hannigan’s attitude seems remarkably condescending toward the earlier ragtime composers, and I am inclined to wonder if there is a racial dynamic here, since ragtime is a historically African American musical form, and Bolcom appears to be white[1] and trained as a composer in a historically predominantly-white musical genre. Nevertheless, while I would argue that ragtime’s traditional “care and craft” should not be measured by its adherence to contemporary classical music values, it is noteworthy that Bolcom incorporates traditional rhythmic ideas of ragtime, and uses them in more classically notated ways. For example, Hannigan notes that there is a higher precision in the way expressive directions are notated on the page than in traditional ragtime music. While I would not argue that this makes the music automatically superior—after all, as I argued in the case of Couperin in my blogpost for the first concert of last semester, level of notational detail in keyboard reflects social and cultural factors—it does give us something else to listen for. As in most music of the 20th and 21st century, there is clearly a lot to consider. Yet behind this all is a concert sure to be accessible and fun!

[1]To be clear, I cannot actually find any explicit mention of his race, and am saying this based on photos of him.

Share and Enjoy:
This entry was posted in Uncategorized and tagged Beyond the Notes, concerts, free music, music, Noontime Concert Series, Performing Arts, Top News. Bookmark the permalink. Trackbacks are closed, but you can post a comment.